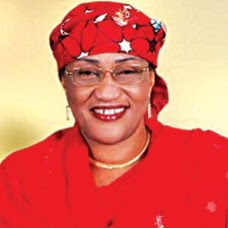 Felix Nwaneri reports on the failed bid of former Minister of Women Affairs, Senator Aisha Alhassan, for the Taraba State governorship position, which appears to have dashed the hope of many who had wished to see Nigeria’s first elected female governor
There is no doubt that former Minister of Women Affairs, Mrs. Aisha Alhassan, blazed the trail of women’s participation in governorship elections during the 2015 general elections given the way she fought doggedly for the number one position in Taraba State. A woman of many firsts – the first female Attorney General and Commissioner of Justice in Taraba State, first woman to be appointed Secretary of the Federal Capital Territory (FCT) Judicial Council and first woman to be elected as senator in Taraba State – these feats explain why many see her as a “made-of-steel amazon.

” It was this asset that she had brought to bear in her political career, especially during the 2015 governorship election. She not only fought her way to emerge as the candidate of a party, but a leading one. No woman had before then been handed the governorship ticket of a major political party before Alhassan became the standard bearer of the All Progressives Congress (APC). A rare feat, no doubt, but Mama Taraba as she is fondly called was at the time the senator representing Taraba North Senatorial District in the National Assembly. She was elected to the upper legislative chamber in 2011 on the platform of the then ruling Peoples Democratic Party (PDP) after defeating the incumbent, Senator Manzo Anthony, in the party’s primaries before beating a former governor of the state, Rev. Jolly Nyame, who contested on the platform of the defunct Action Congress of Nigeria (ACN) in the general election. She later defected to the APC and proved that her emergence as the party’s flag bearer in the governorship contest was not a fluke by giving the ruling party in the state (PDP) and its candidate, Darius Ishaku, a run for their money. For the first time since the country’s return to civil rule in 1999, the PDP had to sweat to win the governorship election in the north eastern state.

There was no clear winner after the first round of balloting and the Independent National Electoral Commission (INEC) had to conduct a rerun before Alhassan could be defeated. Ishaku polled 369,318 votes to beat Alhassan, who polled 275,984 votes, but the latter did not give up without a fight. She approached the Elections Petition Tribunal, which declared her winner of the election on the ground that Ishaku was not duly nominated by his party for the election. But, the hope of those who had wished to see Nigeria’s first elected female governor was dashed, when the Court of Appeal ruled that the tribunal was wrong in giving victory to Alhassan. The judgement did not deter Mama Taraba, who swiftly headed for the Supreme Court to challenge the judgement. But, after listening to the addresses of counsels to both parties, including those of the PDP and INEC, Justice Bodeh- Rhode Vivore, who read the lead judgement of a seven-member Supreme Court panel, said: “I am firmly of the view that there is no merit in this appeal. It is hereby refused. The judgement of the Court of Appeal is affirmed and the return of the first respondent as the governor of Taraba is affirmed.” Having exhausted all the steps in her legal battle to unseat the Governor Ishaku, and the hope of her teeming supporters dashed, Mama Taraba returned to her job at the Ministry Women Affairs. Alhassan’s nomination as a minister by President Muhammadu Buhari did not come as a surprise to those who know their political ties. She had been an avowed believer in Buhari and it dates back to the President’s Congress for Progressive Change (CPC) days. She had in 2010, donated her premises in Maitama, Abuja for Buhari to declare his presidential campaign ahead of the 2011 elections. Even as a PDP senator then, she never gave up on Buhari. But, politics being a game of the possible, Mama Taraba was caught in the web of test for loyalty in September 2018. In an interview with the BBC Hausa Service, Alhasan said she will support former Vice President Atiku Abubakar for the 2019 presidency even if President Buhari decides to contest. Her words: “Atiku is my godfather even before I joined politics and again, Baba Buhari did not tell us that he is going to run in 2019. Let me tell you today that if Baba said he is going to contest in 2019, I swear to Allah, I will go before him and kneel and tell him that ‘Baba, I am grateful for the opportunity you gave me to serve your government as a minister. But Baba, just like you know, I will support only Atiku because he is my godfather. If Atiku said he is going to contest.” She further stated that she was not scared of being relieved of her appointment as minister because of her position.
“If because of what I said, I am sacked, it will not bother me because I believe in Allah, that my time has elapsed. Baba is not a mad man like those calling for my sack. They have been sending it and spreading that if Baba sees this, I will be sacked,” she said. Prior to the interview, there was a video in which she described the Atiku as Nigeria’s next president.
“Mr. President, our father, Nigeria’s president for 2019, God willing, in your presence today are your people, who have been placed under your care for forever,” she said as the head of a Taraba APC delegation during a visit to the former vice president. Expectedly, her comments earned her the rage of Buhari’s loyalists, who called for her immediate sack from the federal cabinet, but some Nigerians commended her courage to express her mind despite being an appointee of the President. The criticisms, notwithstanding, Alhassan remained resolute. She reiterated her stand that there was no going back on her decision to support Atiku in the 2019 presidential election. But, she later resigned as a minister and also quit her membership of the APC. She had before then notified the President of her interest in contesting for the governorship position of her state, but was disqualified due to what the National Chairman of the APC, Comrade Adams Oshiomhole, described as acts of indiscipline. In her letter to the President dated September 29, 2018, Alhassan thanked Buhari for given her the opportunity to serve Nigerians.


She stated that though she kept the President in the know about her governorship ambition, she was however taken aback when she was disqualified by the party from contesting the primary and more troubled when no reason was given. According to her, it would be out of place for her to remain as a minister in the government when the party that formed the government does not find her qualified to be a governor, hence her decision to resign her post as a minister. She later joined the United Democratic Party (UDP) and emerged its governorship candidate after getting the unanimous endorsement of all the party’s 224 delegates from the 16 local government areas of the state.
AbdulRazak Gidado, the only governorship aspirant of the party before the former minister joined the party had earlier announced that he was stepping down for Alhassan. In her acceptance speech, Alhassan said: “I assure you that I will work round the clock to ensure that our enemies are put to shame by winning the governorship election in Taraba in 2019.” She urged Taraba people to rally round the UDP “because it is a party with great potential for the development of the state.”
Her dream was not to be as the people of the state opted to re-elect Ishaku of the PDP in the March 9th, governorship election. The incumbent governor won 12 local government areas out of the 16 councils of the state, polling 520,433 votes to defeat the candidate of the APC, Sani Danladi, who emerged second with 362,735 votes, winning only four local government areas. Alhassan came a distant third as she polled 16,289 votes.
Unlike in 2015, it is not clear whether Mama Taraba will challenge the outcome of the poll at the election petition tribunal. Perhaps, doing this will rekindle the hope of her teeming supporters in Taraba and across the country who are anxiously waiting for the inauguration of Nigeria’s first female elected governor.