Gunmen attack family of five, kill one in Taraba State 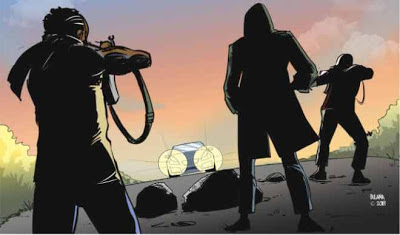 Tragedy struck in Takum Council Area of Taraba State yesterday as armed bandits attacked the family of five on their farm, killing a member of the family following various degrees of injuries he sustained from gunshots.
The Guardian learned that the other four members of the family including the father, a retired principal, who survived the attack, are presently undergoing medical care in an undisclosed hospital in the area.
It was learned that the victims were on the farm harvesting maize when the armed bandits stormed the farm and opened fire on them, during which a member of the family died.
Caretaker chairman of the council, Shiban Takeri, confirmed the incident, saying it occurred at the farm when members of the family went to harvest their produce.
Takeri, who expressed worries over the sad incident charged security agencies to intensify security to end the incessant attacks and kidnappings by armed bandits in the area.
The council, which is the home town of Governor Darius Dickson Ishaku and former Minister of Defense, General Theophilus Y. Danjuma (rtd.), had in recent times been witnessing various crimes ranging from kidnappings, communal clashes, and armed robberies.
Also confirming the report, the state’s Police Public Relations Officer (PPRO), David Misal, said the gunmen were yet to be identified, adding that more patrol teams are being deployed to the area for possible arrest.
Meanwhile, the Theatre Commander of Operation Lafiya Dole, Major General Olusegun Adeniyi, has disclosed that it has set up ‘Super Camps’ on wheels to counter the Boko Haram insurgency in Borno State.
Adeniyi spoke when he led journalists on a visit to Magumeri, Gubio, and Benisheikh over the alleged capture of two council headquarters by insurgents last week.
He also addressed troops of 5 Brigade Battalion and interacted with members of Gubio community, which was attacked last Thursday.
He said the reports indicating that the army had withdrawn its personnel from the affected areas, which exposed the communities to insurgents’ attacks, “was false and misleading
Adeniyi explained that the ‘Super Camps’ on wheels could traverse difficult desert and forest terrains, adding that trenches were shifted, with the mobilisation of troops on mobile patrol wheels to access Boko Haram strongholds.
“We are also mindful of the protection of lives and property in the theatre of war.
Nigerians need to understand that troops did not withdraw from Magumeri, Gubio and other locations in Borno and the North East,” he said.