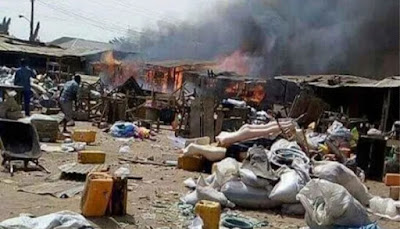 It appears that it has become the norm that any crime not linked to herdsmen won’t get the necessary attention, condemnation and action, the danger of premeditated interest and unconvincing stereotyping of a tribe in a country where there is multitude of tribes and different tongues.

As we talk, lives are being decimated in Wukari, Taraba State in a sustained deadly conflict between Tivs and Jukuns. When will the mortal internecine war between the Junkuns and Tivs come to an end?

At the last count, undisclosed scaring number of deaths have been recorded and the tally is on a frightening increase. The Federal University in Wukari, an institution that has revitalised the local economy of Wukari and its environs, has been shut down indefinitely as a result of the renewed clash with state governments evacuating their citizens schooling there. If this isn’t scary, then nothing else will be.

Too many questions coursed through my troubled mind as I wrote this. To start with, what would make two tribes with thin ancestral, cultural and religious differences engulf in the vicious trade of killing each other? Why is the world silent to the pogrom going in Taraba? Why the dead silence by the rights groups and religious bodies, even opposition parties? Why isn’t there an accusing finger on the President? Why is the governor of the state silent on the killings of TIVs and Jukuns?

So these people should be allowed to continue mauling themselves until no one is left? Time for all well-meaning Nigerians to rise and lend coordinated voices against the senseless killings going on in Wukari. When brothers fight, their land becomes the benefits of strangers. Enough of the senseless pogrom in Taraba.

As enshrined in the 1999 Constitution (as amended) the first responsibility of a state is the welfare and security of the people. Any state that fails to secure its citizenry is headed for doom and therefore does not qualify to be called a state.

Wukari is in violent crisis at the moment and it’s incumbent on Governor Darius Ishyaku to ensure that peace is restored to the trouble spot. Also, the perpetrators and instigators of the latest crisis must be arrested and prosecuted for murder and wanton destruction of properties.

The governor, as the chief security officer of the state, should engage the State Police Command and other allied forces in the state in his approach to containing the latest conflagration in Wukari. He also needs the input of thought leaders, traditional and religious leaders as well. It won’t be out of place if he deploys a bipartisan approach by enlisting the support if the All Progressives Congress (APC) in tackling the crisis before it snowballs out of control.

In the eventuality that the crisis is beyond the ken of the governor, he should not hesitate a second to inform President Muhammadu Buhari, the Commander-in-Chief of the Armed Forces, who is the chief security officer of the nation and whose prerogative it is to deploy the military to any part of the country for peace keeping.

Agreed, the Tiv-Junkun crisis predates his administration. Nevertheless, the renewed crisis in Wukari exploded under his very watch. If he succeeds in quelling the crisis before it becomes a pogrom, it will be to his eternal crisis. If he fails, then it will forever discredit whatever might have been the achievements of his administration. Now it is time to act decisively.