Salah: Deputy Governor, others pray for end to Taraba crisis 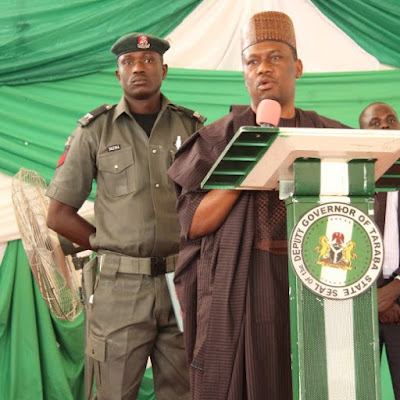 Taraba State Deputy governor Alh Haruna Manu on Sunday joined the Muslim community in the state to pray for an end to communal clashes and other security challenges bedevilling the state.
Speaking with journalists shortly after observing Eid prayers at the Taraba State University Eid ground to mark the beginning of Salah celebration, Manu called on all warring sides in the conflict to give peace a chance.
The Deputy Governor noted that the Salah period offers an opportunity for both Muslims and non Muslims to reflect on their lives and make choices that would foster peaceful and progressive coexistence rather than fanning the ambers of division and crisis.
“Let me first of all congratulate all the Muslim community in the state on this great occasion of Salah celebration. It is very important to note that our celebration is not as fully as it should have because we cannot ignore the fact that there are serious security concerns in our dear state, despite the enormous efforts of the state government,” Manu stated.

“This day offers us the opportunity to once again look back deeply into the kind of choices we make to ensure that they are such as would foster peaceful coexistence and mutual development rather than cause crisis and retrogression.
“Today, we unite in prayer for a lasting end to the ongoing crisis in the Southern parts of Taraba and indeed the whole state. We can not make any meaningful progress of we don’t put an end to this crisis. Let me call on all the warring sides to sheath their swords. In this fight, there can be no winner. In the end, we are all losers.”
In his Salah message, the state governor Darius Ishaku equally urged the people to intensify prayers for peace in the state and for the safety of the Muslim Ummah on hajj to the Holy Land of Mecca and Medina.
The governor assured that he would remain neutral and ensure development in all parts of the state, regardless of ethnoreligious considerations.
Daily Sun reports that most people in the state turned out in colorful attires to celebrate the Salah festivities on Sunday.