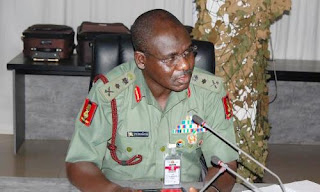 A report by Vanguard indicates that the army captain fingered in the killing of three police officers attached to Inspector-General of Police Intelligence Response Team, IRT, engaged a welder to remove police cuffs from suspected kidnap kingpin, Alhaji Hamisu Wadume.

Surviving policeman narrates how he miraculously escaped death They are said to have made useful statements to investigators. Sources say the officers are being investigated over what happened after the killing of the police officers and not before.

It was gathered that immediately the suspected kidnap kingpin was rescued from the policemen, who arrested him, the army captain took him to his base from where he called his friend who is the Divisional Police Officer, DPO, in-charge of Ibi police station. Immediately the police officer, who was on leave arrived, the army captain told him to contact the police station so that keys to the hand and leg cuffs used in arresting the kidnap kingpin could be produced to unchain him.


Unfortunately, sources said, efforts by the DCO to contact his men failed and the captain directed him to engage a welder to remove the cuffs, which they succeeded after which he took the suspect to his house.

It was gathered that after that, the army captain called the station officer at Ibi police station, demanding that all evidence relating to the policemen from IRT be erased in the station.


The inspector initially hesitated in carrying out the captain’s directives until he threatened to deal with him. Consequently, he reluctantly tampered with the records by tearing the page where the IRT team officially recorded their presence on official duty in Ibi.


They were oblivious of the fact that records were still intact in other police diaries.

The army captain, in his resolve to obliterate every evidence that would expose the raw deal, nearly killed the badly wounded police officers after they were rescued and taken to Ibi police station but for the intervention of other senior police officers and soldiers, who reminded him that their survival was recorded on video by villagers that thronged the scene of the shooting.

Meanwhile, Peoples Democratic Party (PDP) Governors Forum has condemned the killing of the three policemen and some civilians by men of the Nigerian army in Taraba. Chairman of the forum and governor of Bayelsa, Seriake Dickson, in a statement he issued on Monday, August 12 in Abuja, described the killings as “unfortunate, sad, tragic, wicked, malicious, unprofessional and totally unacceptable” to the people of the country.