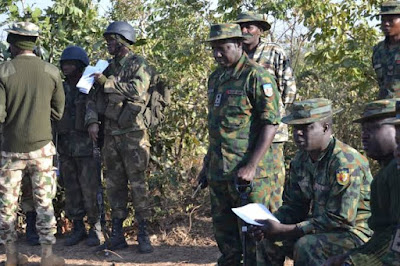 The Joint Investigative Panel set up by the Defence Headquarters(DHQ), in Abuja, to probe the killing of four officers and one civilian by soldiers in Taraba State, is set to submit its report to the Chief of Defence Staff(CDS), General Abayomi Olonisakin, today.

This is just as Daily Sun gathered that the seven-man panel with members drawn from the Army, Navy, Air Force, Police, Department of State Security (DSS) and the DIA, have raised suspicion over the alleged confession of the man at the centre of the incident and kidnap kingpin Hamisu Bala Wadume, in a video released by the Police Force headquarters, Abuja.

The panel which commenced its sitting in Taraba State where it interviewed all those involved in the gruesome act, relocated to Abuja last week to conclude its hearing.

The panel which held its interview session at the Defence Intelligence Agency (DIA), was said to have interviewed the three police officers alleged to have played a role in the killing of their colleagues as well as the re-arrested kidnap kingpin, Wadume, who was taken to the venue by the personnel of the IGP Intelligence Response Team (IRT).

It was gathered that the outcome of the report which is expected to be submitted today, might indict the role played by the Divisional Police Officer, Divisional Crime Officer and the Station Crime Officer respectively.

Sources further revealed that investigation by the  panel showed  that one of the police officers actually provided the keys to the leg chain and handcuffs on Wadume after he was rescued from the IRT operatives.

However, the police are said to have countered that claim as it has the keys to both the leg and hand cuffs.

The coming days is bound to be interesting as the outcome of the report may throw the roles the two security services played in the saga.

It was gathered that the two services are waiting for the final report of the panel to be made public before they would begin a cold war.

On the fate of Captain Balarabe Tijani, Daily Sun,  gathered that the captain was not the Commanding Officer Of 93 Battalion, Takum, as its being speculated. It was gathered that an officer in the rank of a major is the commanding officer of that Battalion and not Captain Tijani.

It was also gathered that the captain who is now in detention in one of the military detention facilities at Ibi, after being interviewed by the panel would be moved to Yola, which is the headquarters of the brigade in the area.

Meanwhile the Nigerian Army authorities have made arrangement to move all the soldiers and officer who participated in the killings of the police officers. The suspects Daily Sun, gathered would be moved to the brigade headquarters in Yola, from where they would be moved to Jos, Plateau State that heads the 3 Division which is the mother unit of the brigade.

Pending the recommendations of the panel, it is expected that a Board of Inquiry (BoI), would be constituted to investigate the matter in preparation for a General Court Martial (GCM). If found guilty, the culprits risk life sentence.

It was also gathered that aside Captain Tijani, who ordered the killing of the police officers, other personnel mentioned by Wadume, have been picked up and made useful confessional statement to the panel.

Meanwhile the killing of the police officers has continued to draw condemnation from both the military, police and the public, who are awaiting the report of the panel to made public.