New Chief Judge of the State Sworn; Promised to be Fair and Just to All 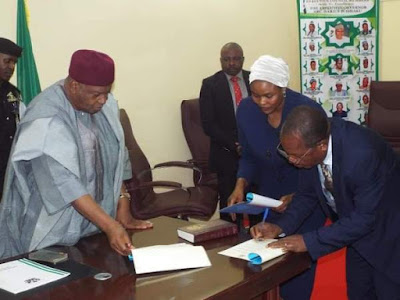 The Executive Governor of Taraba state, His Excellency, Arc. Darius Dickson Ishaku has sworn the new State Chief Judge Hon. Justice Philibus Adetur.
In his address, the governor urged the new chief judge to be fair and just in his dealings and also to uphold the confidence reposed on him.
Gov. Ishaku added that he should always have it behind his mind that the people of Taraba state are looking up to him to always serve judgement to whoever deserves it without delaying because it’s often said that “justice delayed is justice denied”.
The governor also called on the people to rally around the Chief Judge so that he will succeed in his new field of assignment.
The new Chief Judge in his words of thanksgiving, appreciated the governor for having the confidence in him and for appointing him into such a highly exalted office, promising to be fair and just to all and to always stand by justice.
He asked Tarabans to have confidence in the judiciary and to always seek redress with the judiciary as they will always find justice when ever they come calling.
The event took place at the Taraba state Executive Chambers government house Jalingo and was witnessed by H E. Enrg. Haruna Manu Deputy Governor Taraba state, Rt. Hon. Abel Peter Diah Speaker TRHA, Hon. Danladi Baido Member Reps, Hon. Anthony Jellason SSG, members Taraba state House of Assembly, among others.