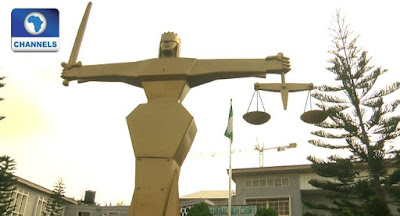 A magistrate court in Jalingo on Wednesday docked the Mr. Samuel Ande, the pastor of Court of Christ Deliverance Ministry for criminal conspiracy and trespass on property belonging to Mr Bright Danfulani Suntai, niece to the former Taraba State governor, late Danbaba Suntai.

The accused and two others were alleged to have conspired to sell a property belonging to Mr. Suntai under the pretext that the said property was bequeathed to his church by the father of the defendant, the late Babangida Suntai.

Counsel to the defendants Barr C. C. Ichele, told our correspondent that the accused had earlier put the property on sale after the death of the owner of the property and father of his client, claiming that the father had given him the property located in Jalingo.
Ichele argued that no member of the family was aware of the said transaction and the family still had custody of the documents relating to the property while the accused could not present any proof that the said property was bequeathed to him.

Ichele lamented that “the attempt by the accused to forcefully take over and dispose of a property belonging to one of his church members who is now late is highly unbecoming of a religious leader,” and urged him to “rethink his actions as they speak volumes about his person and the ministry he represents.”
Barr Mathew Kentishe told our correspondent that his client had received the property in question from the late Mr. Babangida Suntai and it was unfortunate that he was now standing trial for criminal conspiracy in a gift he received in good faith from one of his church members.

The presiding judge, Mulumba Barnabas, of Area Court 2 Jalingo, adjourned the case to 30th of August after listening to the case by the defense to decide if there was a prema facie case against the accused.