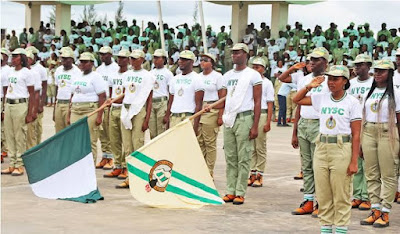 The National Youths Service Corps (NYSC) has arrested three suspected corps members with fake certificates at the orientation camp in Taraba State.
According to the NYSC State Director, Mrs. Florence Yaakugh, the suspects were nabbed during the registration at the camp located in Ardo-Kola Local Council.
She said: “They came for registration and the verification officer discovered they carried fake certificates and verification papers.
The Director-General of NYSC, Brig-Gen Shauibu Ibrahim had recently expressed deep concern over the activities of fake corps members who cannot make a correct sentence in the English language.
The suspects, Nasiru Yau, who claimed to have studied Mass Communication, Shehu Murktar -Computer Science and Illiyasu Usman, Sociology, all from Isfop University Cotonou, Benin Republic.
Yaakugh said they have been handed over to the police for further investigation and prosecution.
“The Director-General directed us to fish out such persons and hand them over to the security operatives for further investigation and this is what we are just doing,” she added.
The State Director charged the security agents to do a thorough job so that the truth would come out and justice is done to the affected persons. She stated that there is a similar case involving a female corps member, also a foreign student but the verification officer was yet to conclude internal investigation into her case.
Stating their own side of the matter, the suspected fake corps members claimed they graduated from the institution but admitted to forging their verification papers.