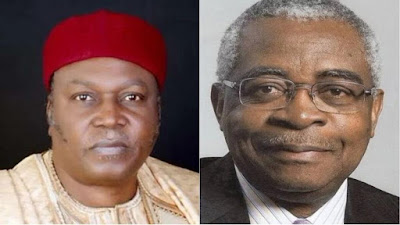 The Tiv Youth Organization, TYO, has accused the Taraba State Governor, Darius Ishaku, TY Danjuma and others of supporting their kinsmen in annihilating Tiv people in Taraba State.

TYO made the allegation while lamenting the silence of Ishiaku and TY Danjuma over the alleged killing of some Tiv people residing in the State.
DAILY POST had last week reported that the Federal University, Wukari, Taraba State was temporarily shut down, following a protest that greeted the killing of two students and a lecturer of the institution.

It was alleged that the students were killed by some Jukun militias who invaded the university campus.
However, TYO alleged that Ishaka and Danjuma’s silence was a grand plot coordinated to take over the ancestral land of Tiv people in the state.

Addressing a press conference on Wednesday, the President of TYO, Comrade Timothy Hembaor, however, expressed worry over the development.
According to Hembaor: “We wish to draw the attention of all Nigerians of good conscience and the international community to the ongoing ethnic cleansing in Taraba State as being perpetrated by Jukun militia against Tiv. Hundreds of innocent Tiv men and women, the young and the old are being butchered in cold blood like animals in Taraba communities.
“No day passes without more Taraba indigenes of Tiv extraction being hacked to death by rampaging Jukun militia. Most Tiv communities have been deserted and are now occupied by the same Jukun militia. Farms and other economic property owned by Tiv people in Taraba State have been destroyed.
"The recent killing of two students and a lecturer both of Tiv origin in Wukari town by yet to be apprehended Jukun militia readily comes to mind. These unprovoked attacks in Taraba against Tiv have continued unabated and have assumed the dimension that they are not only well-coordinated but are also sponsored and targeted at wiping out the entire Tiv race in that state. We vehemently condemn these attacks and call for an end to the killings.

“We make bold to say that as the umbrella body of Tiv youths worldwide, we are grossly not satisfied with the manner the government of Taraba State has handled the crisis. The Darius Ishaku administration has clearly demonstrated bias in its approach to the conflict. Its silence and inaction whenever Tiv people are killed put the Ishaku administration favourably on the side of his kinsmen the Jukun who must eliminate the Tiv.
“Governor Ishaku has failed to do as much as issue one statement of condemnation on the killings of Tiv people in his state. This is leadership failure in itself and a gross violation of provisions of the country’s constitution which state in Chapter Two, Section 14 that “the security and welfare of the people shall be the primary purpose of government.
“He has failed to uphold that section of the constitution as far as Tiv indigenes of his state are concerned. We suspect complicity on the part of the Taraba State government in the unfortunate attacks and killing of Tiv people of that state.
“It is now clear to us that the renaming of Tiv communities by Governor Ishaku during his first term in office was a prelude to the monster that has now bared its fangs.
“Gentlemen of the Press, we are also worried that another illustrious son of Taraba State and former Minister of Defence, General TY Danjuma who had been very vocal in condemning Fulani herdsmen attacks on his kinsmen has suddenly gone mute on the killing of Tiv by Jukun militia.
“General Danjuma had publicly accused the Nigerian military of colluding with herdsmen to kill farmers and take over their lands. We wonder how different the ongoing massacre of Tiv in Taraba is from the attacks by herdsmen that the retired general has not found it big enough an issue to talk about. Here again, we suspect complicity!
“We suspect a grand plot coordinated by Governor Ishaku, General TY Danjuma and others to support their kinsmen to annihilate Tiv people in Taraba State so as to take over their ancestral lands.
“Our findings have proven that the allegation that Tiv militia in Benue was responsible for the attacks on Wukari and other settlements in Taraba which gave rise to reprisal attacks is false and unfounded.
“Tiv Youth Organization wishes to make it abundantly clear that the Tiv in Taraba State are bonafide indigenes of that state and have in the past hundreds of years contributed immensely to the growth and development of the area now known as Taraba. Tiv people of Taraba, therefore, deserve to be protected and accorded the same rights and privileges enjoyed by other indigenes of the state.
“The 1947 census figures placed the Tiv in Taraba as undisputed majority race with a total population of over 4,400 representing 34 per cent of the total population of Wukari which is made up of 19 other ethnic groups with the Jukun representing 17 per cent of the total population of the area.
“By the records, the Tiv people of Taraba State were the single largest ethnic group in the state and spread in the seven local government areas of, Takum, Donga, Wukari, Ibi, Gassol, Beli and Gashaka. The statistics put to rest any argument about indigeneship of Tiv in Taraba.
“We call on Architect Ishaku to see himself as the Governor of Taraba State and not that of the Jukun tribe. He should, therefore, be seen to be concerned about the security of every Taraba person.
“We equally urge General TY Danjuma to speak out against the ongoing pogrom visited on Tiv in Taraba State. Now is the time the elder statesman should demonstrate the true spirit of nationalism. His silence is too loud!
“TYO wishes to also state that it is unfair that other ethnic groups in Taraba State have not considered the Tiv worthy of any strategic position in the state even as they pioneered its creation through one of Tiv’s illustrious sons, Hon. Hitler Gbaaondo now of blessed memory who moved the motion for the creation of Taraba State in the House of Representatives in 1983.
“The TYO also wishes to state that the continued marginalization of the indigenous Tiv people in Taraba should be immediately addressed to avoid further bloodshed and enable those displaced to return to their homes.
“We equally ask the Jukun to as a matter of necessity change their negative perception of Tiv people and be willing to embrace peace and also see the Tiv as their brothers.”