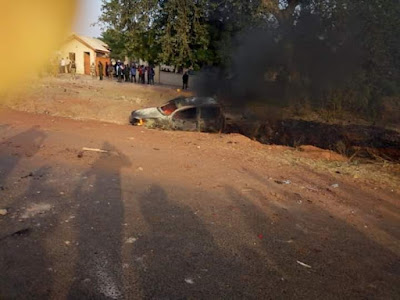 Taraba State Governor, Mr. Darius Ishaku, on Thursday imposed a 12-hour curfew on Wukari town with immediate effect to prevent breakdown of law and order.
In a statement issued in Jalingo and signed by the governor’s Senior Special Assistant on Media and Publicity, Mr. Bala Dan-Abu, the curfew is to run from 6am to 6pm until further notice.
According to the statement, the curfew was necessitated by the alleged “invasion” of Wukari by the governorship candidate of the All Progressive Congress with political thugs, causing breakdown of law and order.
“The attack was between thugs of APC and its aggrieved members of United Democratic Party.
“The governor wishes to advise politicians to exercise restraint as they move about with their campaign.”
But in a swift reaction, spokesman of the APC in the state, Mr. Aaron Arthimas, accused Governor Ishaku and the Peoples Democratic Party of sponsoring attack on the convoy of the APC governorship candidate in which 10 vehicles were allegedly destroyed.
“Our governorship candidate, Sani Abubakar Danladi, has just escaped assassination attempt in Wukari town.
“We were negotiating the last roundabout in Wukari town on our way to Ibi when youths in Wukari, suspected to be loyal to PDP, attacked our convoy.
“The youths in their numbers barricaded the Ibi roundabout area of Wukari where our convoy was heading, and were armed with dangerous weapons with which they opened fire on the convoy.
“I cannot ascertain the casualty figures now, but some vehicles have been burnt and tension is still high,” he said.
Arthimas, who said Governor Ishaku was in Wukari the previous day, also accused the governor of plotting the attack.
-Punch