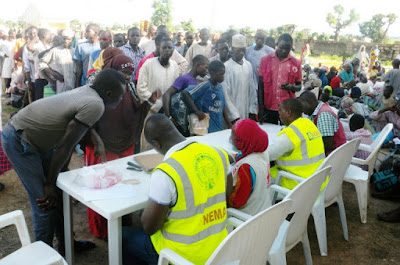 The National Emergency Management Agency (NEMA) has distributed food items to 3,200 households displaced by 2018 flood disaster in Taraba State.
NEMA head of operations for Adamawa and Taraba States, Mr. Abbani Imam Garki, who distributed the materials yesterday in Jalingo, the state capital, said that 11 local government areas were affected by flood.
He named the benefitting councils as Jalingo, Karim Lamido, Ardo Kola, Lau, Sardauna, Gassol, Takum, Donga, Wukari and Ussa, and Ibi. Garki said that the relief materials were meant to provide succour for the flood victims, and to also complement the efforts of the state government in lessening the burden of the victims.
Abbani, who was represented by his assistant, Mr. Midala Nya Anuhu, urged the affected communities to avoid building on waterways and canals. In his speech, Taraba State governor, Darius Ishaku, commended NEMA for assisting the victims of flood disaster.
Ishaku, who was represented at the event by the deputy governor, Haruna Manu, charged  NEMA  and the State Emergency Management Agency (SEMA) to monitor the distribution of the items.