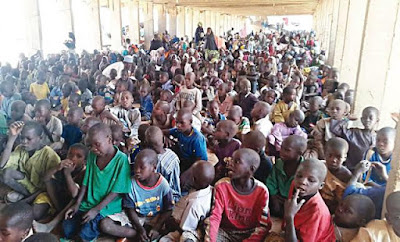 Food crisis has rocked the Internally Displaced Persons Camp located in Negatavah Government Primary and Secondary School in Jalingo, the Taraba State capital.
The IDPs, SUNDAY PUNCH learnt, now go from house to house to beg for food.
Our correspondent, who visited the camp on Saturday, reported that the children looked malnourished as some mothers have resorted to menial jobs and begging to get food for their children.
An IDP, Mrs Yarda Musa, who lamented the hardships facing them, said lack of food and medicals were the main problems.
She said, “When we came into the camp over a year ago, we were being fed three times a day, but as we progressed, the feeding was reduced to two times a day and for the past three weeks we only eat once a day.
“As we speak, we don’t know what our children will eat the next day. Our food has finished and our children are crying for food, but we cannot help it. Many of the IDPs are now out to beg for food from people in the neighbourhood. The situation is bad.
“We call on government and well-meaning individuals to come to our aid before we are consumed by hunger.”
An IDP mother of nine, Mrs Rose Hosea, said most of the children in the camp were starving.
She called for government’s urgent intervention to save the children from dying.
“We want to also call on government to provide security and help renovate our homes to enable us return home. Government should help us with toiletries, foodstuff, medicals and mosquito nets to prevent the children from malaria and cold,” she added.
The IDPs also called for the deployment of military personnel to Bujum Kasua, Sabon-Gida, Mako and Didango to enable them return to their homes.
According to them, four persons from the camp identified as Omega Markus; Joseph Bwei; Friday Babale and Alexander Bwei, were killed earlier this year in separate attacks when they tried to visit their villages.
When contacted, the Permanent Secretary, State Emergency Management Agency, Mr Nulvaga Danhabu, said he got a distress call from the camp earlier on Saturday and directed appropriate officers to solve the problem.