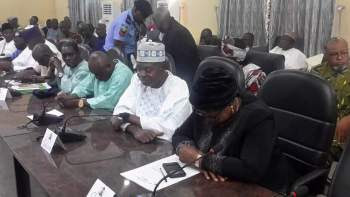 Casual workers in various ministries, departments and media houses in Taraba state have demanded for permanent appointment to enable them get better pay.
The workers lamented that they were being paid stipend of N4,000 to N7,000 as monthly salary  and that  they were being  exploited  by the state government by  engaging them as casual staff for the past 10 years.

One of such staff in one of the state`s ministry in Jalingo said that he has been engaged as casual staff since 2008 and being paid N4000 as monthly salary.
He told our reporter that he and other casual staff in the ministry report and close for work at the same time with permanent staff, but only paid N4000 as salary without any allowance.

Another casual staff working in the state Radio Corporation, who did not want her name to be mentioned, said she has been a casual staff in the station for the past 10 years on N7000 monthly salary.
According to her, she took the casual job because she could not find a job anywhere, adding that there is no indication that she will be converted to a permanent staff.
She said casual staff in the state are facing difficulty to maintain themselves with the stipend being paid to them as salary.
Daily Trust findings revealed that almost all the ministries, the two states owned Media Houses and Government House, Jalingo engaged hundreds of workers as casual staff.
Commenting on the issue, the State Chairman of Nigeria Labour Congress, comrade Peter Gambo said the casualization of workers is illegal.
He said that was why the Nigeria Labour  Congress wants  the minimum wage to be a law which will be applicable in both public and private sector in the country.