The Chief of Air Staff (CAS), Air Marshall Sadique Abubakar says two Helicopter Gunships will be stationed on the Mambilla Plateau of Taraba to combat threat of insecurity in the state and its environs. 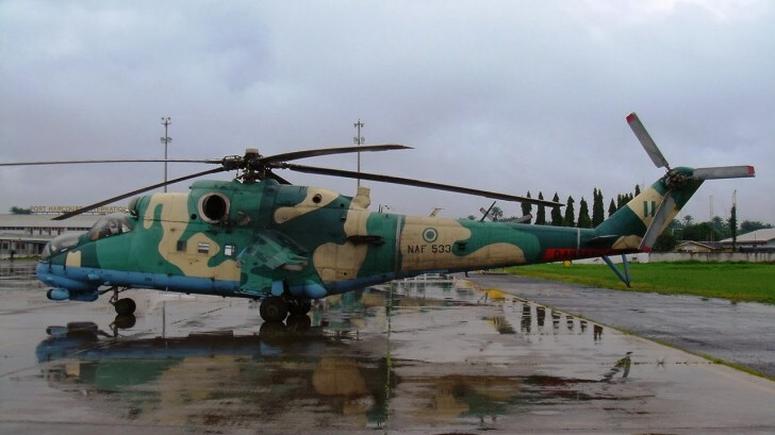 A Nigerian Air Force helicopter (Leadership Newspaper)
Abubakar announced this on Saturday during a courtesy call on the Chief of Mambilla, Dr Shehu Baju in his Palace in Gembu, during his maiden visit to the 23 Quick Response Wing of the Nigerian Air Force in Gembu, Taraba.
The CAS, who said the Force was awaiting the arrival of five helicopter gunships from Italy and one MI 35 from Russia any moment from now, told the monarch that two of the gunships would be stationed in the Airforce Base in Gembu.
“We have plans to build 30 Housing Units for our men here, but we are still waiting for the papers which are before Gov. Darius Ishaku and as soon as the paper work is completed, work on the Housing Units will commence.
“We are also going to open an Airstrip and and a Helipad where smaller planes and helicopter gunships can land.
“Out of the helicopters we are expecting to take delivery from Italy, two will be stationed here to support the Quick Response Unit in Gembu,” he said.
Abubakar said he was on the Mambilla Plateau to assess the 23 Quick Response Unit, established in 2018 to add value to the provision of security in the state, and to also see how to improve on the security situation in Taraba.
He commended Gov. Ishaku for his support to NAF and promised that as soon as work on the landed papers was concluded, the force would commence construction work on the housing units and helipad.
Responding, the monarch commended the chief of air staff for establishing the 23 Quick Response Unit in his domain, saying the establishment of the Unit had helped in addressing the issue of insecurity in the area.
He called for the relocation of the proposed Headquarters of the Unit from Nguroje to Gembu for efficiency, given the population and the difficult terrain of the area, the request which the CAS immediately granted.
Baju, who lauded the successes recorded by the Nigerian air force in the fight against terrorism in the NorthEast, also appealed for the establishment of an Air Force Hospital and School in Gembu for the good of the people of his domain.
He also commended the CAS for the medical outreach it recently conducted in his domain.
Earlier, while welcoming Abubakar to Gembu, the Acting Chairman of Sardauna Local Government, Rev Godwill Sol, commended officers and men of the force for the efforts they were making in maintaining peace on the Mambilla Plateau.
The chairman noted that the people of Mambilla were eternally grateful with the presence of the quick response unit and called for the provision of mobility for the men to access difficult terrains on the plateau.
Sol said government was working towards providing accommodation for the personnel of the unit and that provision was being made to allocate land for the construction of an Air strip for small planes to land on the Plateau.
The News Agency of Nigeria (NAN) reports that the chief of air staff and his team had during the visit inspected sites for residential quarters for officers, helipad as well as CO’s Lodge, and officers’ accommodation.
He also held an interactive session with officers and airmen and women during the visit.