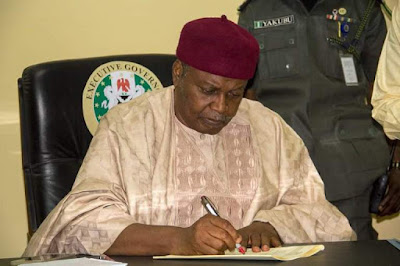 Taraba state governor, Architect Darius Dickson Ishaku came into power in 2015, before then most Tarabans did not know that someone like Darius was existing in the state.

Going by the political zoning system in the state, power was supposed to shift to southern Taraba so prominent people like Senator Emmanuel Bwacha and David Sabo Kente from southern Taraba indicated interest to succeed the then governor Danbaba Danfulani Suntai (late).

However, Retired Army General Theophilous Yakubu Danjuma (TY Danjuma) and some other leaders from Southern Taraba went on a meeting in order to deliberate on who they could adopt as a consensus candidate.

In the first meeting Elder Nyapuri suggested that David Sabo Kente (DSK) should be adopted, and everyone seemed to have agreed with the suggestion but General TY Danjuma later called for another meeting where he greedily and authoritatively ordered that one unknown guy called Darius Dickson Ishaku (DDI) should be adopted.

Although nobody knew General TY’s plan and why he suggested that they should adopt the Kaduna base guy called Darius, yet the unknown guy was adopted and endorsed by the leaders without meticulous deliberation because nobody wanted to go against TY’s order.

TY himself is a Lagos state base guy therefore he would not mind whether Darius will perform well or not, for all he cares is to always received selfish monthly allocations from the Kaduna state base naïve politician.

The people of Taraba state were very unhappy about the outcome of the meeting; they felt TY was imposing a non Taraban on them. This is because DDI base in Kaduna state, he did not even have a house in Takum Local government area where he claimed he held from.

However, he is believe to be a Taraban from southern zone, so the southern people who never wanted to miss their own chance of becoming governor of the state had no choice than to support DDI.

The following are the 10 deadliest sins of governor Darius:

Governor Darius’s campaign slogan during the 2015 was “give me peace and I will give you development” but after 3 to 4 years in power he has not been able to give a single development, instead he embezzled over N2.3billion and claimed he used it in building a vegetable farm which he called “green house”

According to Comrade Emmanuel Bello, the governor’s aide on public affairs  the green house is not longer functioning well again. Emma Bello made this revelation after resigning his appointment as an aide to the governor.

Takum general hospital which Darius claimed to have renovated remains as it has always been. The renovation story is a sham; a blatant lie. Disregard such petty campaign gimmick.

Darius succeeded Danbaba who had already started building a general hospital in Ussa, the work was almost a job well done before Danbaba was involved in a helicopter crash. When Darius became governor he abandoned the project.

Darius promised that if elected as governor he would construct Kurmi LGC road but reverse is the case as the road remains dilapidated. The saddest news is that he siphoned N48billion from the state government account in the name of Kurmi road project.

This was the reason why the governor was booed during his campaign in Kurmi. The aggrieve youth did not conceal their grievances as they booed him when he went on the podium to deliver a speech.

Taraba state university (TSU) was established by the then governor, Danbaba to help poor Tarabans have access to education but when Darius came to power he made the school fees unaffordable to the poor hence making many students to dropped out from school. Now the school fees is being paid every semester and not yearly as it was under Governor Danbaba.

[6] No payment of salaries, pension and gratuity –

Darius knowing very well that majority of Tarabans depend on their salaries as source of income but he has never been prompt in payment of salaries. In fact he abandoned civil servants especially the LGC workers and the worst primary school teachers.

As the next election is swiftly approaching, Darius started paying pension and also released N5000 million for the gratuity. This is what some Tarabans described as “a very big lackluster decision” and a campaign “gimmick”.


“N5000 million cannot pay up to 100 people. This shows that he has come up with another bait to lure the people to vote for him again but the campaign gimmick won’t work this time around”

Just like TY imposed Darius on Tarabans, Darius has also emulated his boss by imposing Mark Bako Useni on Takum 2 as the PDP candidate for state house of assembly.

Mark Useni has been the Honorable member representing Takum 2 for over 10 years now; he then decided to contest for National House Representative Member but as a result of his poor performance in the state Assembly the people rejected him and he was defeated by Hon. Rimamnde Shawulu Kwewum.


After being defeated Mark Useni went back to Takum 2 to collect the state assembly ticket as if he owns it but they people rejected his moved, however, in collaboration with governor Darius, the duo conspired and snatched the ticket for Mark Useni.

[8] Creation of chiefdom with ethnic bigotry –

Darius embark on a hypocritical mission called “creation of chiefdom” he made some villages chief third class chief and second class chief but abandoned the first class stool in Takum which is known as Ukwe Takum as a result of ethnicity. His boss TY is against it so he succumbed to his will.

Darius promised to construct Ussa road if elected into power but after the election that made him governor of the state, he went and told Ussa people that the project is “Federal government project”

like Ussa people would ask: What does this insinuate? That he was not aware that the project was Federal Government project until he became governor then he discovered it? Never!


No wonder the governor’s campaign in Ussa LGC was very scanty. The people of Ussa are very volatile and sensitive that they did not want to listen to another campaign lies from the governor hence they boycotted his campaign.

Darius turned Taraba youth to political thugs, he pays them monthly to fight and defend his poor administration. This led to the death of not less than 19 youth in February 2019 apart from those that have been dying from time to time.

E-rats are those he hired to defend him on social media, he pays each of them N20, 000 monthly. Instead of giving the youth jobs these are what DDI decided to give them.

These are all facts, everyone who doubts can fact-check. There are many sins of governor Darius which are not mention in this article but shall be listed in the subsequent article.