Tension in Taraba over moves to grab farms, land of fulanis in Mambilla plateau 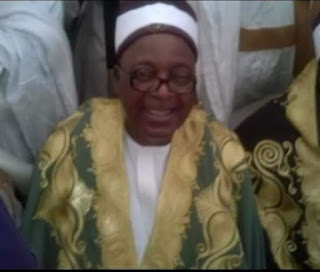 Mambilla-Plateau in Taraba has been gripped since last two years with an increase in clashes between the largely nomadic herders and farmers over land, water and grazing rights. 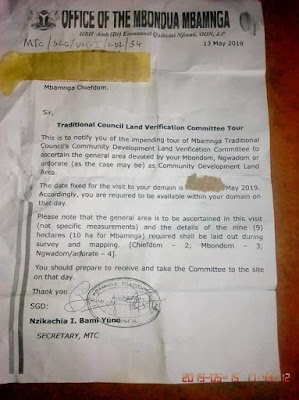 A commercial truck driver who ply the area, Mr Joel Johnson said that already, there was a serious tension by the move to retrieve farms and lands belonging to indigenous Fulani nomads, ‘’ in Mbamnga there is confusion and tension over the controversial traditional land verification committee tour.
‘’ Some clans in the area had vowed to resist any attempt to grab their farms and lands,’’ said Johnson.

Investigations have revealed that a monarch in the area Mbondua Mbamnga Mr. Emmanuel Njiwah had earlier directed all ward heads (Mbondom,Ngwadom or ardorate) under his chiefdom to devote some lands as community development  land area that could be accrued to the chiefdoms.

Multiple inside sources had confided that, ‘’ farms and disputed lands mostly belonging indigenous Fulani are targeted in this process.’’
A  circular obtained , titled : ‘’ Traditional Council Land Verification Committee Tour’’, dated 13 May, 2019, signed by Nzikachia I.Bani Yuno secretary of the Mbamnga traditional council , stated that ,’’ This is to notify you of the impending tour of Mbamnga Traditional Council’s Community Development Land Verification to ascertain the general area devoted by your Mbondom,Ngwadom or ardorate as community development land area.’’

It further stated, ‘’ Please note that the general area is to be ascertain in this visit (not specific measurements) and the details of the nine (9) hectares (10 ha for Mbamnga) required shall be laid out during survey and mapping (1.Chiefdom 2. Mbondom 3. Ngwadom 4. Ardorate.

‘’You should prepare to receive and take the committee to the site on that day,’’ said the circular.

Mbondua Mbamnga Mr. Emmanuel Njiwah
Mbamnga was among the recent craved chiefdoms created by Taraba state governor, Arch. Darius Dickson Isiyaku , ‘’ to bring development closer to the people.’’
Reactions Trail
For now reactions started trailing with stakeholders prevailing on the federal government to nip in the impending crisis from its bud.

Bako Josiah of Taraba Concern Forum had regrets the way and manner some chiefdoms were elevated or created, ‘’that’s why they balkanized our traditional institutions by creating additional third class rulers that can dance to their tunes.

‘’ You see, tension is now enveloped in the area, I think measures should be hurriedly taken to avoid loss of lives and property,’’ Josiah stressed.

Also, expressing same concern, Amb. Hassan Jika Ardo , said, ‘’It’s quite unfortunate that we are experiencing another plan to cause a serious conflict and crisis on the Mambilla-Plateau more than what we had experienced in 2017.

‘’And to crowd it all, the persons  behind the crisis in 2017 ,in 1982 and other crises are  the ones now instigating same crisis on the Mambilla-Plateau, is quite unfortunate.
Ambassador Hassan Jika Ardo

‘’ We don’t expect this now, because this is somebody who has serve various positions in government instead of preaching peace, bringing people together, developing his area he should not be hell bent in causing confusion among his citizens that lived together for over a hundred years.

Ardo, who is also the Nigerian Ambassador in Trinidad and Tobago, argued that, ‘’The land in question is not under the control of traditional rulers and on that he has no reason or whatsoever set up committee to acquire land for him, which we all know that the crisis that erupted was as a result of land issue in the Mambilla-Plateau and he is among those who instigated the crisis.

‘’ So, I am calling on the commissioner of police Taraba state,the governor and other security chiefs to wage into this matter to stop another serious crisis that may likely erupt in Sardauna local government. We are law abiding citizens and people started returning living in peace and he is now trying to cause another confusion,’’ he urges.

In the meantime, the state Bureau for local government and chieftaincy affairs is yet to comment on the matter as calls put to the permanent secretary of the bureau were not answered neither response to the SMS.