on May 07, 2019
Court of Appeal sitting in Yola, Adamawa state capital has upheld the judgement of Federal High Court Jalingo.

It will be recalled that  two months ago Federal High Court sitting in Jalingo has disqualified the All Progressives Congress (APC) gubernatorial candidate in Taraba State, Alhaji Sani Abubakar Danladi, from contesting Saturday’s election in the state.
The presiding judge, Justice Stephen Pam, also restrained the Independent National Electoral Commission (INEC) and APC from recognising, accepting or treating Danladi as the candidate of APC in the governorship election.

The court held that the information contained in the affidavit that Danladi was born on 14th of February, 1968 is in conflict with his date of birth contained in the West African Senior School Certificate (WASSC) he submitted to INEC, which indicates that he was born on 3rd of April, 1977.
Justice Pam further declared as false, the information given by Danladi in the affidavit supporting his personal particulars in the INEC Form CF 001 submitted to INEC.
The court thereby disqualified Danladi from contesting the gubernatorial election in the state scheduled to hold on Saturday, 9th of March or any subsequent date to be slated based on the false declaration of age.

Taraba Facts has also obtained a copy if the court Judgment delivered on 3rd of May 2019 by Honourable Justice Chidi Uwa. 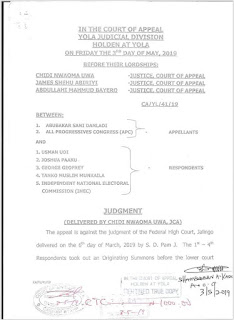 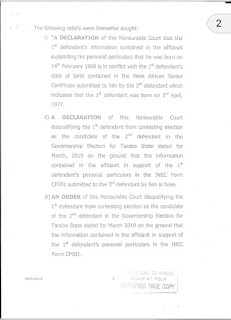 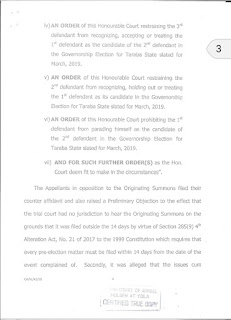 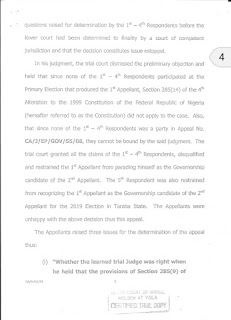 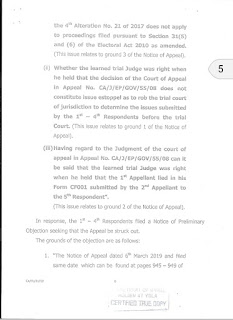