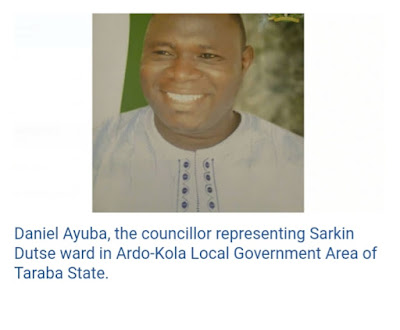 Speaking to Channels Television, neighbours and friends who witnessed the incident said Ayuba was kidnapped at the early hours of today.

The kidnappers who arrived at about 12:00 am to pick Ayuba up, were confronted by youths of the area that tried repelling them with bow and arrow.

However, the gunshots fired into thin air by the abductors scared them away, thereby injuring many as they scampered for safety, before whisking the councillor away.
“What has happened is a wakeup call on us the locals and poor, we will use any means possible to protect our territory, because it seems the state government is a toothless bulldog who cannot control the security agencies except when orders are received from the Federal government,” they stated.
The residents of the area said they were surprised as to how the kidnappers were able to beat all the security checkpoints mounted before carrying out the act.
They alleged that there is a connivance between the security agents at the checkpoints and his abductors.