I Almost Died In The Hands Of Takum Vigilantes 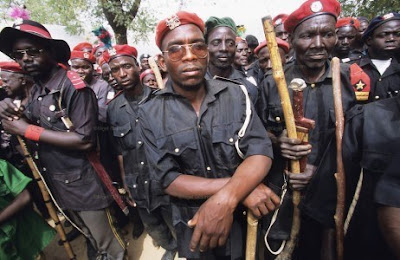 Mr Emmanuel Iortile said he was with the two persons that were killed in Takum on May 1st, 2019 by men of the vigilante group in Takum local government area of Taraba State. As a survivor,  Emmanuel further explained to journalists how he was bundled alongside his two siblings and how he escaped death in the hands of the deadly vigilants.

“On May 1st, 2019, my two younger brothers asked me to convey them on my motorcycle to river Fete, in Takum local government area of Taraba State, where they used to go for fishing.

“The reason for their coming to River Fete was to avoid being part of a usual money contribution, which was to take place on Sunday. Instead, my brothers said they were not having money, therefore, I should take them to River Fete where they would fish and sale for the local bank (contribution).

“I conveyed them on my motorcycle to Fete area but unkown to us, some Jukun Vigilantes had made a road block, they stopped us and asked for our identity. “We answered them that we were Tiv people and that we used to come to Fete River for fishing.

“They asked us to come down from the bike, while we were stepping down, they conducted a search on us but what they found was our fishing instruments. They said they were not convinced, that people had been terrorising the area and we could be some of the terrorists.

“They seized our fishing instruments and took us to the chief of Fete, whose name I don’t know. The chief collected our motorcycle, I had about N25000, which I just collected from the local bank in my wallet, the Jukun guys collected it before we arrived at the chief’s palace. “The chief actually asked us our mission to fete, and we responded that we were coming to fish and get money for our share Bank on Sunday. “He was also not convinced. He stated that there was a lady who was staying with them within the area, she was taken away by some Tiv guys, who claimed that the lady was their family member and the family requested her presence.

“The chief claimed that since she was taken away, the community has lost her contact and she is nowhere to be found, therefore, he could not trust us. “He asked some of the three who claimed to be vigilantes to take us to the police in Takum for more interrogation. “To my greatest surprise, some of the youths immediately started beating us, some of their colleagues had to intervene, telling them that it was not proper since we were to be taken to the police for interrogation.

“They tied us up and before they finished, a white Hilux van belonginng to the council chairman of Takum local government, which we know very well, drove in”. “Though, the chairman, Hon Shiban Tikari was not there, his official driver, whom we also know very well, was the one driving the Hilux van.” “They put us in the Hilux and covered it with tampoline.” “On our way to Takum, the tampoline opened on the other side of the vehicle due to heavy wind.” “I was able to see outside and noticed some of the areas they were taking us through because it is an area in which I grew up. They branched into the bush just after five minutes and I told my brothers that these people were taken us to killed.

“They drove deep inside the bush and stopped, they removed my immediate younger brother, Dzeeyum Iortile, whom they shot at and killed. “They came back and took Tersoo Iortile, who is also of the same father with me and shot him also. “They came the third time, this time it was my turn. They brought me out and untied me, I asked them to allow me to pray before they would kill me but one of them refused, saying that there would be no prayert until I get to where my two brothers were lying dead.”

“We advanced to the place where I saw my two brothers lying dead, I knelt down and started praying, the one that took me to the place was still holding the neck of my shirt, they were waiting for him to release me and give himself some distance from me so that bullets would not touch him. “As I knelt down and started praying, my spirit told me I should run to escape, I took off as directed by my spirit, they shot everywhere as I was running but God protected me” “That was how I ran to a certain village, an area I know very well, I explained what happened to the people and that was how the villagers came to know of the development.

“But before I could get to the village, some hunters who were in the bush discovered the bodies and saw the Hilux leaving the scene and they mobilised the youths. Meanwhile, I was somewhere else in another village where I alerted the people of what happened.” “I was the one who in the process of running in the bush, trace down to where my sister married in one of the village around Takum”

“The area is where I stayed for over five years so I known it very well, when I went there and I narrated what happened, already the chief of the area had summon the community men to find out why there were gunshots in the bush” “the villagers within the area went on search and discovered the two young men dead in the bush. While on their way for the search, they sow the Hilux van that conveyed us to the bush” “When they discovered that the people in the Hilux did something evil, they called some of their groups who were behind to block the hilux and as well alerted the military in Takum, the Hilux escaped the first roadblock and ran out of the village”

“The groups in their large numbers on their motorcycles followed the Hilux, to put of the four arm men jumped out of the vehicle when they discovered that there tension, the Military check point that was ahead of them therefore intercepted the Hilux”

“The official driver of the Takum local government council was still behind the wheel, they were taken to Takum police station where they were detained” When contacted, the chairman Takum local government council Hon. Shiban Tikari confirm that both the driver and the Hilux were from his office, Shiban said he gave his Hilux and the driver to the newly constituted joint Patrol team comprises of hunters and Vigilant  in Takum to combat kidnapping within the area. Shiban who spoke to journalist in Jalingo said he was yet to get details of what transpired between the Vigilant and the boys that resulted to killings.

LEADERSHIP reliably gathered that both the Takum local government council Chairman Hon. Shiban Tikari and all the suspects in connection to the killing and dumping of the two boys including the Emmanuel Iortile were taken to Abuja by the police for further investigation. The police Public relation officer Taraba state command has already confirm the incident and said the police was investigating the matter.