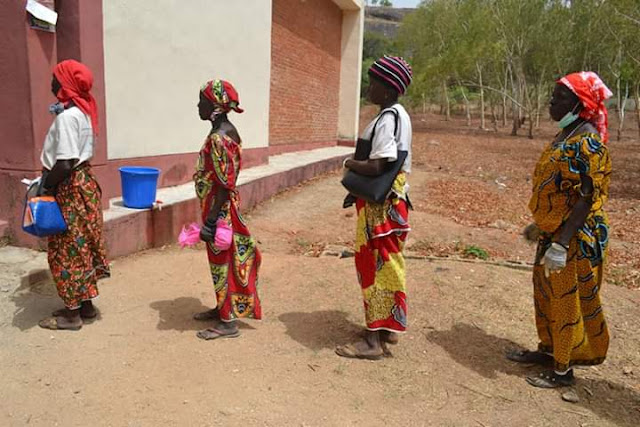 At last, the Conditional Cash Transfer (CCT) to cushion the hardship necessitated by the lockdown following the coronavirus disease (COVID-19) outbreak has commenced in Taraba State.
The payment, which started yesterday in 12 of the 16 councils of the state, according to the Payment Monitoring Officer, Fentiriman Jauro, will reach all the councils.
For effective implementation, the exercise, which is taking place at the various wards of the benefiting councils, is being monitored by an official of the National Cash Transfer Office, Abuja; State Focal Person; and officials of State Cash Transfer as well as media practitioners.
Councils presently benefitting from the payment include Takum, Ussa, Wukari, Ibi, Sarduana, Gashaka, Bali, Gassol, Ardo-Kola, Lau, Yorro and Karim Lamido.
The monitoring officer expressed satisfaction with the exercise, as “it is going as expected.”In a related development, the COVID-19 task force of Victims Support Fund (VSF) has delivered food and medical supplies to Borno State government for distribution.
The food items, comprising 6,137 bags each of rice, beans, maize, as well as 6,137 each of four-litre kegs of cooking oil and two kilogrammes of salt, were distributed to 50,000 households in Internally Displaced Persons (IDPs) camps and host communities.VSF targeted 1.56 million IDPs Maiduguri, Dikwa, Gwoza, Monguno and Pulka, a border community with Cameroon.
Presenting the items yesterday in Maiduguri, head of the task force, Mrs. Toyosi Akerele-Ogunsiji, disclosed that critical stakeholders and partners in insurgency-affected states would be provided with drugs, sanitisers, facemasks, gloves and soap to support the fight against the deadly virus. She said the VSF taskforce was closely working with relevant agencies at federal and state levels to contain the pandemic.
While appreciating VSF’s support, the deputy governor, Umar Kadafur, who doubles as Borno COVID-19 Response Team Chairman, called on philanthropists and other stakeholders to emulate the intervention of fund against the virus.
Also, Governor Babagana Zulum of Borno has released 25 tonnes of rice and N5.6 million cash to parents of 112 missing Chibok girls to mark the sixth year of their abduction.
The girls were kidnapped from Government Secondary School, Chibok, by Boko Haram terrorists on April 14, 2014, while writing the West African Secondary School Certificate Examination (WASSCE).
Governor’s spokesman, Isa Gusau, disclosed yesterday in Maiduguri that a delegation of three commissioners (education, women affairs and poverty alleviation) and a lawmaker representing Chibok constituency presented food and cash donations to support the agonising parents.
According to him, 250 gallons of cooking oil were also delivered by the four-member delegation.After the presentation, they also delivered Zulum’s message of empathy, hope and assurance on their missing daughters,Though the terrorists abducted 219 girls, 107 reportedly escaped/released.