‘Rise of hooliganism in Southern Taraba’ 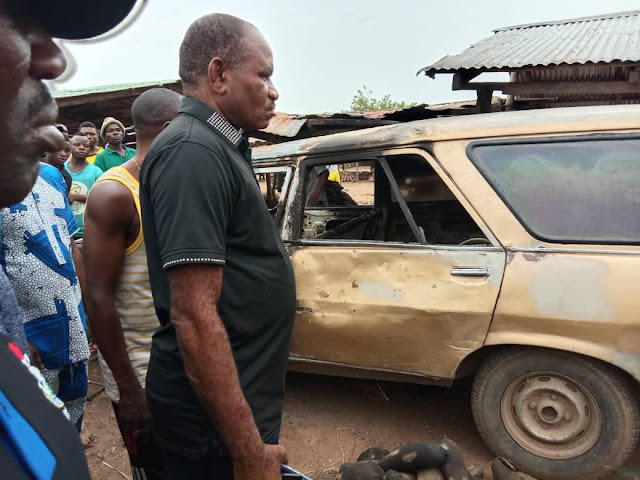 Following the recent attacks on Wukari and the murder of Mr. Yusuf Usman in Donga by a suspected Tiv militia, I wish to put the record straight over the campaign of calumny against Arch. Darius Dickson Ishaku, the Executive Governor of Taraba State.

The campaign is spear-headed by those with a mission  to undermine the good efforts of the governor who has been working to maintain peace and enhance development throughout the state. It should be noted that when Governor Darius Dickson Ishaku came to power in 2015, as a leader concerned with protecting the lives of people of the state generally, he immediately embarked on peace meetings with his Benue State counterpart and various communities in Southern Taraba, aimed at finding lasting solutions to the crises and to establish sustainable peace in the state. These efforts include:

This is why they continue to embark on their campaign of calumny and falsehood against the governor, saying he did not do much to sustain peace in the state.

It is evident they are cowardly characters who lack the confidence to reveal their identities.

Their campaign is being prosecuted by a desperate group aimed at undermining the legacies of the governor and his rising political profile.

On Thursday, 2 April, 2020 Mr. Yusuf and his wife from Donga left for the farm, unfortunately they were attacked on the way by the suspected militia, resulting to the murder of Yusuf and abduction of his wife who has still not been found.

The same day in the evening in Wukari, the militia attacked Wukari from the Old B.B. Bread area, which led to the death of a young man and burning of some thatched houses.

As a matter of fact, the suspected militias have turned themselves into a terror group terrorising the peace-loving people of Southern Taraba.

These dastardly attacks did not start today, but have been happening over several decades, leading to loss of many lives, dislocation of people and destruction of properties running into billions of Naira. For example, in 1991 Hon. Kasuwa Agbu, a member representing Wukari I in Taraba State House of Assembly, was attacked by the militia while on her way to Akwana her home town. Up to today, she has not been found.

That same year, scores of people were killed and houses burnt by the suspected rampaging militia in Kente, and 67 others were seriously wounded. In 2001 the same suspected militia in Chonku also killed many people and 150 were displaced from their homes.

It should be noted that the wave of attacks by the group seems to have continued unabated till today. I recall the gruesome murder of the 19 Nigerian soldiers who were on a peace mission and were abducted in Va’ase the Taraba-Benue border town in October 2001.

The latest attacks in Donga and Wukari therefore, did not come to us as a surprise as it is their stock-in-trade to engage other  tribes, or even themselves, in perpetual fight.

In the case of the Wukari attack by the suspected Tiv militia in the early hours of Tuesday, 7th April, 2020 (the second in two weeks), it was successfully repelled. It is worthy to note that since the resumption of hostilities, series of unprovoked attacks by the militia groups were carried out against the people of Southern Taraba, starting from 1st April, 2020.

Governor Ishaku never relented in his efforts to bring the crisis situation to an end. Indeed through his efforts the hostilities ceased by September, 2019.

Furthermore, in order to gain the attention he craved, their faceless writer also brought into his campaign the issue of the selection of Gara of Donga, accusing the governor of not announcing the name of the new traditional ruler.

The writer peddling this falsehood claimed that “Governor Darius has destroyed us economically, socially and politically, now he is targeting our culture”. The truth is that Governor Darius Ishaku will never take any measure or action that will create any crisis in any part of the state, including Donga pertaining to a traditional stool or any matter.

The oath of office he swore (not as a Jukun governor, but the Governor of Taraba State) is to promote peace, progress, harmonious co-existence and cultural upliftment of the people of Taraba State as a whole. If that writer and his group cannot recognise his successes, the least they can do is keep quiet and allow the governor to continue to lead the state to more sustainable peace and development.   Barr. Danjuma A. Adamu is Commissioner of Information and Re-Orientation, Taraba State