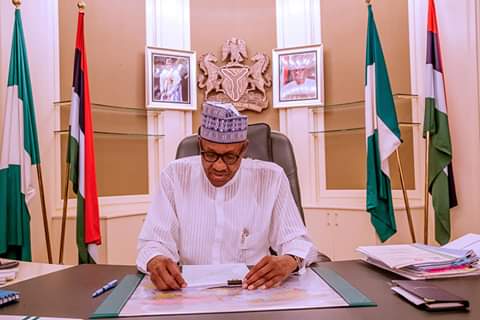 Southern Taraba Elders have petitioned President Muhammadu Buhari over what they say is a consistent lopsidedness in federal appointments in the state.
In the petition dated Friday, March 27, the elders say there was a violation of the federal character principle in the recent appointment of a medical director in the Federal Medical Centre, Jalingo.
According to them, the southern zone of the state has been marginalized and subjected to injustice with the recent federal appointments in the state.

The elders also say they have intimated the Aku Uka of Wukari of their determination to plead with President Muhammadu Buhari on the issue, noting that the Nigerian leader may not be aware of the true situation of things in the state.


“Since the coming of President Buhari, all federal appointments from Taraba, except only one, are Fulanis.
“With about 50 tribes, Taraba has the greatest diversity but under Buhari, Fulani minority takes all Federal positions and Christian appear thoroughly marginalised.
“We appeal to President Buhari to help redress the fear of unjustifiable marginalisation in this instance where the non-Fulani candidate far outperformed the female Fulani candidate that some people want to impose even though she got second place,” part of the petition read.

The elders also stated that “the federal character principle recommends the rotation of posts within deserving zones; in this case, the three senatorial zones of Taraba state.”
“The position of the medical director of Federal Medical Centre Jalingo has remained in the northern senatorial zone for 16 years.
“The federal character principle prohibits sacrificing merit on the altar of zoning.
A D V E R T S   H E R E

“The first candidate from southern zone came first by a wide margin in addition to the fact that the southern zone is long overdue to represent us in that capacity only for the position to be given to the second candidate who is from the northern senatorial zone again,” the elders said.
The elders said they are convinced that the approving authority was misled to act contrary to the federal character principle in endorsing the appointment of the new medical director.
They called on the relevant authorities to set up a high powered committee to look into the matter “to ensure that the right thing is done to stop this illegality.”