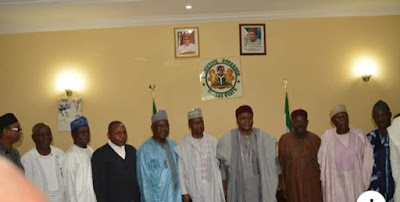 His Excellency, Governor Darius Dickson Ishaku today swore in the Chairman Taraba state Civil service Commission in person of Chief John Mamman and four other commissioners of the commission.
Commissioner 1. Alh. Dauda Mamman
Commissioner 2. Mr. Julius Bitako
Commissioner 3. Hon. Philip kundila
Commissioner 4. Alh. Zubairu Abubakar
Similarly, Justice Emmanuel Dodo was sworn in as a member, Taraba state Judicial Commission.
The Governor charged them to be proactive and to put a new face in the Commission
The swearing in took place at the Government House Executive Chambers Jalingo and was attended by His Excellency, the Deputy Governor, Engr. Haruna Manu; PDP National Vice Chairman North East, Chief Barr. GT Kataps; the Secretary to the State Government and others.