Panel indicts Capt. Balarabe, Ibi DPO, others in killing of policemen in Taraba 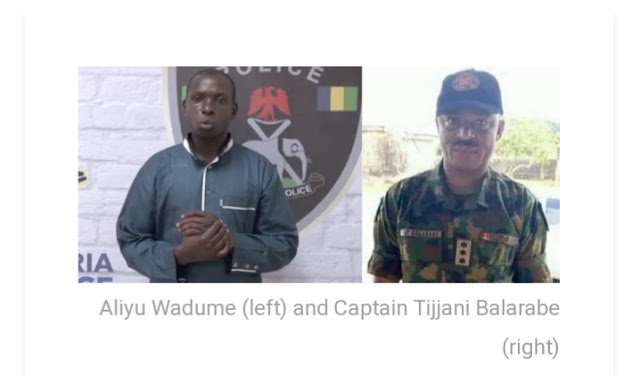 The joint investigative panel set up by the Defence Headquarters to probe the killing of three policemen and a civilian on August 6 in Ibi, Taraba State, has recommended five soldiers and two police officers be sanctioned.

The seven-man panel was set up at the instance of President Muhammadu Buhari.

The report recommends that Captain Tijani Balarabe, Sergeant Ibrahim Mohammed and Corporal Bartholomew Obanye, as well as the Divisional Crime Officer of Ibi Police Division, Assistant Superintendent of Police Aondoona Iorbee, and Inspector Aliyu Dadje must pass through disciplinary measures over the incident.

According to the report, Taraba kidnap kingpin, Hamisu Wadume, must be prosecuted for “gunrunning and possible kidnapping”.

Recall that on August 6, three policemen attached to the Inspector-General of Police Intelligence Response Team and one civilian were shot dead by soldiers attached to Ibi Unit under the 93 Battalion, Takum, Taraba State.

The policemen had gone to arrest Mr Wadume in Ibi town when the soldiers opened fire on them and thereafter freed the kidnap suspect.

The Defense Headquarters on August 9 set up the panel headed by Rear Admiral Ibikunle Olaiya, and officers drawn from the army, navy, air force, police, the Department of State Services and the Defence Intelligence Agency.

A statement on Tuesday by the acting Director of Defence Information, Col Onyema Nwachukwu, confirmed that the panel had submitted its report and recommended sanctions for the suspects.

The statement said, “After a thorough and painstaking investigation into the incident, the board submitted its report to the convening authority observing that there were infractions and poor communication between police officers and troops.

“It was also observed that there was non-adherence to the Standard Operating Procedure by both parties involved in the incident. It further made some recommendations to the army and police to bring anyone culpable to book in accordance with extant laws. The board recommended that the army and police should further investigate Captain Tijani Balarabe, Sergeant Ibrahim Mohammed, Corporal Bartholomew Obanye, DCO Ibi Police Division, ASP Aondoona Iorbee, and Inspector Aliyu Dadje for complacency and necessary disciplinary measures.

“It was also recommended that further investigation be conducted on Hamisu Bala for gunrunning and possible kidnapping in order to prosecute the suspect. Additionally, the board said the military and other security agencies must establish an inter-agency liaison desk to include senior officers for timely resolution of future misdemeanour.”