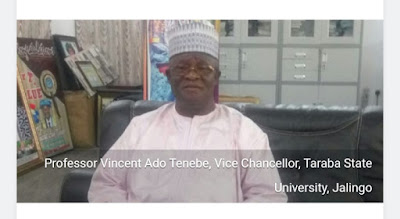 The Vice Chancellor of Taraba State University, Professor Vincent Tenebe, has disclosed that his vision for the University is to make it among the top ten universities in the country.
Tenebe, who disclosed this on Saturday while interacting with reporters in Jalingo, said that the government needs to pay more attention to the funding of education in the country and to create a better model for private sector participation.
He said that within two years, the University was able to move from being the ninety fourth in the country to become sixty fourth based on the NUC ranking, and promised to achieve the dream of making the University a world class university and among the top ten in the country before the end of his tenure as Vice Chancellor.
Government, he said, needs to focus on the education of citizens and and to ensure that they are gainfully employed as a way out of the current security challenges confronting the country.
“We have the usual challenges of inadequate funding that stops you from doing most of the things you want to do. However, we have been able to utilize the inadequate to do a few things and to keep going,” Prof Tenebe said.
“Talking about what I have been able to achieve in the last two years, well, I can say that we have done a few things with the meagre resources at our disposal. The first thing I can tell you is that when I came in to this University, it was ranked ninety four out of the one hundred and fifty six universities in the country based on NUC ranking. But with these two years, we have jumped thirty points and we now rank sixty four. That is remarkable.
“When I came here, most of the faculties and departments became due for accreditation and last year we went through the process and I can tell you that I have received the result of the accreditation and we scored hundred percent. What that means is that all the courses we submitted for accreditation passed. And we received full accreditation except for one. My mission is to transform this University completely and I promise you that before I leave, I will make this University among the top ten universities in this country,” Tenebe said.
Mr Kelvin Novulga, who works with the University, told Daily Sun that “the University is now experiencing uncommon and unprecedented transformation, both in terms of infrastructure and academic seriousness because the VC is insistent that the community university mentality is relegated to the background and the best standards are maintained.”
Daily Sun reports that Professor Tenebe, who served as the Vice Chancellor of the National Open University for several years, has brought a lot of innovations to bear in the running of the state university that has drastically improved both the quality of learning and social life of students on the campus since he took over as the Vice Chancellor two years ago.