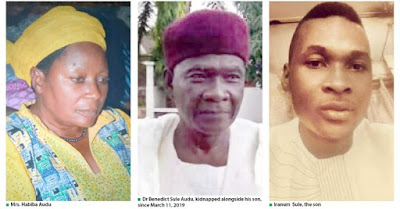 The Audus are one of the families that have been separated and thrown into sorrow by this rising menace. For the Audus not knowing if their breadwinner or their son is still alive, is a torturous pain they have been living every day with for almost months.

On March 10, 2019, Dr Benedict Sule, his son, Iranum Sule, and a family friend, Samaila Akinjiba were kidnapped on their way back to Abuja from Taraba State where they went to cast their votes during the 2019 governorship elections. They’ve since then been in an unknown kidnapper’s den for almost seven months now, leaving their families in a devastating state. The governorship elections have come and gone but the Audus are living with the pain and regret of that period. “My family doesn’t deserve this,” says Habiba Audu, wife of the kidnapped medical doctor. Sixty-three-year-old Habiba, a retired nurse, has been in immense sorrow since her 70-year-old husband and 32-year-old son were kidnapped. “It’s the worst thing ever. I miss them so much.

My husband is my best friend and amongst my children, Iranum is the closest to me. We never went a day without speaking and our bond was so close. Now, I just go home to an almost empty house, not knowing where they are, or if they are even safe,” says Habiba. Habiba recalled the last time she spoke to them. “I didn’t speak to them for a few days before it happened because they were busy with election stuff and I wanted to give them time. I was planning to talk to them after the election, not knowing that I will never get the chance to have a conversation with them again,” she said in a quavering voice. On March 11, the day after the kidnapping, her husband was made to call and tell them they had been kidnapped. She said everyone was devastated upon hearing the news and they started negotiations immediately with the kidnappers.

They, however, reported the case at the Takum Local Government in Taraba State to the DPO on the same day the incidence happened, March 11, 2019. “The kidnappers demanded a ransom of N50m but after much negotiation, they agreed to N7m,” she explained. The family was given a location to take the money to and on the 26th of March, the ransom was paid. However, what should have been the end of a bad dream became the beginning of a nightmare. The day after the ransom was paid, they received a call from another negotiator. “We got a call from a new person who claimed we paid to the wrong person and this new negotiator demanded N10m.”

The family was thrown into another round of despair and they requested to speak to the victims before they pay any more money. However, the negotiator cut the call and that was the last time they ever heard from them. Mrs. Audu in a despondent voice said until now, there has been no communication whatsoever.

“It is God’s grace that is seeing me through or I would have been like a skeleton by now. My husband opened his clinic after he retired from the Central Bank, and since the abduction, I have been the one managing the place,” Mrs. Audu narrated. “I am struggling to maintain his legacy here but balancing it financially with managing the home front hasn’t been easy.” She went on to explain how the clinic hasn’t been doing well since after the kidnapping and how she just realized how her husband was shouldering all the responsibilities without complaining. The family has been in a constant state of unhappiness since their kidnap. Her other three children have been unable to write their exams because of depression.  She said some days, she is barely able to get out of bed or go out when the thought of her kidnapped husband and son overwhelms her. She imagines where they might be or what condition they are in. “Whenever I remember them, I lock myself up in my room and weep for hours,” Mrs. Audu expressed. “But after I cry, I always try and give praise to God because I believe he is protecting them wherever they may be.”

Recalling how she met her husband, Mrs. Audu could barely hold back her tears. “We started courting when I was still in primary school; we courted for 13 years before getting married in December 1981. We’ve not been away from each other for more than a month and now it’s been seven months,” she said in a tear laden voice. Mrs. Audu also lamented the unemployment situation in the country.

“My son studied English at the university, but he was unable to get a job. I wish my son was gainfully employed because if he was, he wouldn’t have been kidnapped. It was because of unemployment that he was available to drive his father to Taraba.”

“ Iranum is quite fragile; a little discomfort would make him sick. I am so worried about him.” Since March, the family has written and complained to all the necessary authorities, including the IG of Police, who Mrs. Audu said they wrote to on the 20th of August 2019, but according to her, nothing has been done. “It’s been months, but still nothing. Whether it is that the police can’t find them or maybe they are not trying, we don’t know. I want them to try and find them, I want to lay eyes on my son and husband again,” she appeals tearfully. Related