Over N6b disbursed to vendors for school feeding in Taraba’ 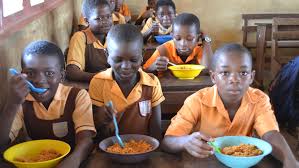 The Federal Government has disbursed over N6 billion to food vendors in Taraba State for school feeding since July 27, 2017. According to the state secretary, National Home-Grown School Feeding Programme (NHGSFP), Idris Goje, the disbursement was made in 16 tranches.
Goje also said that refunds amounting to over N50 million, the N1.2 million recovered by the Department of State Services (DSS) and the recent refund of N1,140,200 not used in five days were ready for repatriation to the Treasury Single Account (TSA).
The NHGSFP secretary, in an interview with The Guardian in Jalingo, said no fewer than 399,091 pupils from 1,800 primary schools across the 16 councils had so far benefited from the programme, adding that pupils’ enrolment had continued to increase.According to him, the programme has not only led to the elimination of malnutrition, but has improved local economy and agriculture.He informed our reporter that “out of the 6,043 food vendors in the state, less than 100 had reportedly defaulted, and the accounts of more than 100 vendors, who withdrew more due to bank system failure, were blocked by the bank for further investigation.”
“It is not fair to accuse the bank and the state officials of conniving to extort money from the food vendors, which is false and malicious. As a matter of fact, it is not possible to temper with any food vendor’s account or fund because the instruments of withdrawal are with them,” said he.Based on the implementation guidelines, defaulting cooks will henceforth be delisted from the programme, he disclosed, stressing that “all food vendors must sign their daily attendance template, which will also be counter-signed by the headmaster and council education secretary for proper monitoring and evaluation.”

Admonishing the vendors to desist from serving food to the pupils late, he warned the vendors against skipping any school day.“All vendors must adhere strictly to the menu and the instructions in the operational/training manual of the programme.“Enormous success has been recorded in the state, as all the indicators are positive.”
The Darius Ishaku government has supported the programme by providing office for it and equipped the personnel among others.The state’s focal person for the programme, Beatrice Kichina, said the state was leaving no stone unturned to ensure 100 per cent success of the programme.