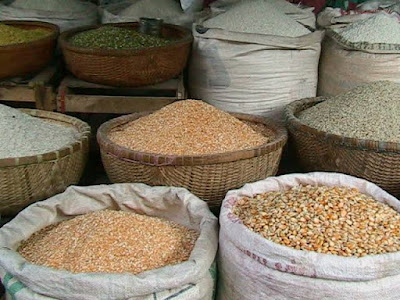 It was further gathered that the activities  of the merchants has caused increase in the price of farm produce in state.

North East Trust learnt that prices of maize, paddy rice and beans have gone up compared to what they were sold during harvest period last year. A 100kg bag of maize is now sold at N8500 and 100kg bag of paddy rice is going for between N10, 000 to N13,000. It was further gathered that a 100kg of maize and paddy rice was sold during last year’s harvest at N4,000 and N5,000 respectively.. The price of farm produce, North East Trust gathered, may  continue to go up because many farmers did not  grow maize and rice this cropping season. Most farmers, our finding revealed, have moved to growing cash crops instead of food crops. The closure of land borders, it was further gathered, had also caused increase in the demand for local rice. A rice farmer in Mutumbiiyu, Alhaji Musa Saidu, told our reporter that  there was likelihood of food  shortage this year because many farmers have abandoned their farms for fear of kidnappers. He said many farmers were kidnapped on their farms in the last few months resulting to many staying away from their farms across some local government areas of the state. Alhaji Musa Saidu stated that apart from fear of kidnappers many farmers decided to switch to cultivating cash crops such as soya beans, beniseed and melon seeds because they cost more last year.

He, however,  said there was a low demand of such commodities this year which has led to price crash. Alhaji Musa Saidu said that a 100kg bag of beniseed sold last year at N90,000 now dropped to N25,000 while the same bag of melon seed sold at N75,000 last year has now dropped to N24,000. Meanwhile, report from Gassol and Bali local government areas of the state said that hundreds of rice farms located by the bank of River Taraba have been destroyed by flood. Worst affected by the flood include part Bali, Tella and Sardirde where rice farms were completely destroyed.