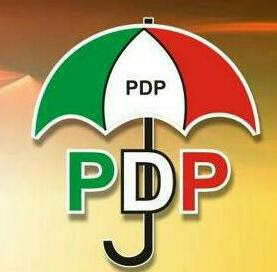 The People’s Democratic Party (PDP) on Friday slammed the call by the former Chairman of the All Progressives Congress (APC) in Taraba Amb Hassan Ardo on the Taraba Assembly to commence impeachment move on Governor Darius Ishaku over misappropriation of funds and violation of the constitution.

Alhaji Inuwa Bakari, the state Publicity Secretary of the PDP stated the party’s displeasure over the allegation at a press briefing in Jalingo.

According to Bakari, Ishaku, contrary to the allegations, was very transparent and prudent in the management of the state resources.

The former Nigerian envoy to the Republic of Trinidad and Tobago, Alh Hassan Ardo, in a press conference in Jalingo recently alleged that Ishaku deserved impeachment for gross violation of the constitution, fraudulent misappropriation of state funds and incompetence in conducting the affairs of state.

The envoy had cited the continual illegal use of caretaker committee chairmen in the state and award of contracts without execution, even when funds were released as well as lingering crisis and kidnapping in parts of the state as some of the reasons for impeachment call.

Bakari, however, dismissed the allegations as wicked and malicious lies of the opposition which he noted, was in disarray due to heavy losses it incurred in the state during the last elections.

“The administration of Gov Ishaku has been very transparent and prudent in the management of government resources.

“In fact, the first thing he did on assumption of office was to block channels of financial leakages which helped in cutting down on waste.

“This has been widely applauded by well- meaning people within and outside the state, including the Nigeria Labour Congress, (NLC) which together with its affiliate bodies honoured him in 2017 with an award of excellent performance,” he said.

He noted that the governor was able to revive nine moribund government companies, sank 300 boreholes, employed 3,000 rescue teachers among others.

While describing Ardo’s call for impeachment of Ishaku as a ‘joke taken too far,’ Bakari said the governor could not be intimidated with spurious allegations.