Many injured, property destroyed as SARS, residents clash in Jalingo 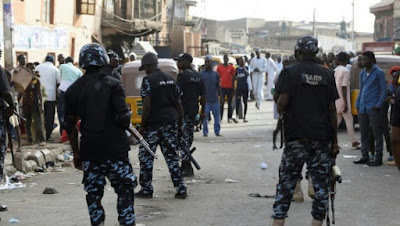 The Special Anti Robbery Squad (SARS) of the Taraba State Police Command on Tuesday injured several residents of Mile-six, a suburb of Jalingo and vandalised shops and other business centres in the area.
An eye witness, Mr Bitrus Kumai, who spoke to our correspondent said that they heard sporadic gunshots in the early hours of the day and later discovered that it was the SARS operatives who stormed the area and started shooting.
Kumai said that the police also brutalised everyone they saw as they destroyed provision stores, beer palour joints and several other businesses in the area.
Mr Thomas Audu, a provision shop owner lamented the vandalisation of his shop as the team broke into it while he was attending to his customers and destroyed the entire shop.
Audu, who showed the bruises he sustained from the beating he received, estimated the cost of damage to his shop at N300,000.He appealed to the state government to intervene in the matter to prevent a reoccurrence.
Also, Mrs Blessing Aboki, a brukutu (local beer) seller who was manhandled by the police team, recounted her ordeal which she said ranged between damage to her cooking utensils to loss of her costumers some of whom made away with her money, while she incurred the cost of over N80, 000.
Also Mr Paul Kamai, operator of a beer palour in the area told journalists that the police laid siege to his joint, vandalised chairs, tables, refrigerator, power generating set, broke bottles and assaulted costumers who were relaxing at the joint.
Residents said the number of residents arrested previously was four while three were arrested today while the team is still patrolling the area.
The state Police Public Relations Officer, DSP David Misal, who confirmed the incident said that youths in the area had mobilised to resist the arrest of a notorious criminal in the area, leading to the confrontation that took place. He however assured that normalcy had already returned to the area.
SUN