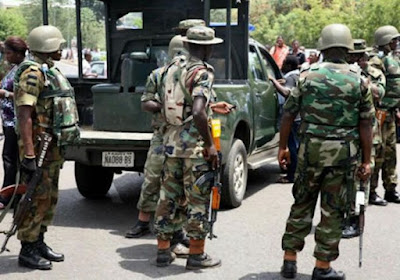 The General Officer Commanding 3 Division of the Nigerian Army, Jos, Major General  Nuhu Angbazo, on Wednesday said the army has commenced operation in Taraba to fish out those causing trouble in the Jukun/Tiv crisis in the State.
Angbazo disclosed this in Takum while addressing Religious and Traditional Leaders, Women and Youth groups on the need for peaceful coexistence in the area.
The GOC who was represented by Brigade General Briggs Daniel said the Chief of Army Staff Lt. Gen. TY Buratai has authorised Operation Ayem Apatuma in the area to fish out bad eggs.
Angbazo solicited support and cooperation of the people to enable security operatives to restore peace in the area, adding that their duty was to bring peace in the area.
He expressed sadness that most of the schools in the area were closed because of the unrest, thereby depriving children who are future leaders the right to go to school.
The GOC urged religious and traditional leaders to preach the gospel of peace to their followers in the interest of peace and development.
On his part, the Brigade Commander 23 Brigade Yola  Brig General SG Mohammed called on those in possession of firearms to surrender them to the Nigerian police or face the wrath of the law.
He tasked leaders at all levels to preach the gospel of peace even as he solicited vital information from members of the public to enable them to succeed.