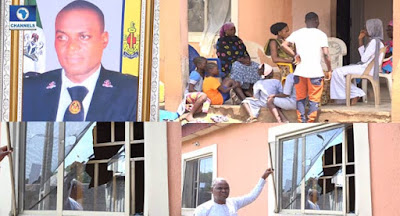 The gunmen after whisking the preacher away contacted the family members and informed them to start saving money for his ransom.

Wife of the victim, Lucy Solomon, who narrated the sad incident to Channels Television in the native Hausa dialect explained that the kidnappers shot sporadically into the air, shattered the windows to their house and beat up every member of the family.

“We were about to sleep when my husband asked me to look through the window and then I saw the abductors. When they got closer, they flashed torchlight at us and asked my husband to come out and follow them or else they will shoot him.

“He obliged and opened the door. Then, they started beating every member of the family. They threatened to kill me and asked me to bring the money at home, I brought it and they left with the money, my husband and my daughter’s credentials.

“They later contacted my son, instructing him to start making some savings for his father’s release,” she explained.

Reverend Philip Jedian, the district superintendent of the church, reacting to the incident, said it is a case too many. He then called on the state government and security agencies to wake up to the responsibility of protection of lives and property.

Kidnapping in Taraba State is on the increase and residents are optimistic that with the commencement of operation Ayem Akpatuma peace will once again reign in the state.

Reverend Solomon’s abduction is coming five days after the state Governor Darius Ishaku disclosed that no fewer than 100 persons have been abducted within nine months in the state.