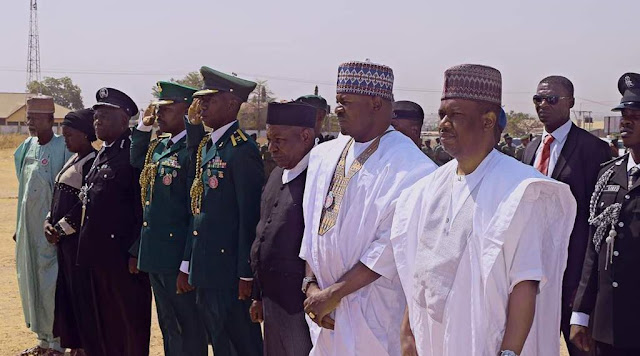 Taraba State Governor Darius Ishaku has observed that fifty years after the harrowing civil war experience, with its attendant loss of lives and property, Nigerians are yet to learn the futility of war and are still treading the path of war and destruction.
This is coming as the governor also promised to support security services with more funds to boost logistics for maintenance of peace in the state.
Ishaku said that the numerous ethnoreligious crises and other security challenges facing the country are the same events the precipitated the civil war, as he called on the people and leaders at all levels to work for national unity rather than sectional interests.
The governor, who was represented by Deputy Governor Haruna Manu, at the Armed Forces Remembrance Day in Jalingo, said that the safety of citizens was a top priority of the administration and called on residents from both southern and central parts of the state to cooperate with troops of the Ayem Akpatuma II who are in the state to restore peace.

He underscored the role of the armed forces in ensuring that the country remained together.
Ishaku also eulogised the sacrifices made by the armed forces in protecting the lives of Nigerians, as he launched the Armed Forces Emblem with N5 million, saying that he has already redeemed the N10 million pledge he made in 2019.

Earlier, Alhaji Saidu Mohammed, Chairman of the Taraba State chapter of the Nigerian Legion, thanked the governor for awarding one slot each to Christians and Muslims in the 2019 pilgrimage.

Mohammed also commended the governor for fulfilling his pledge of N10 million donation to the legion. He congratulated Governor Ishaku for his recent victory at the Supreme Court. He went on to urge the state government to assist the widows of fallen heroes.