Tension over minister’s appointments of 2 REA directors from Taraba 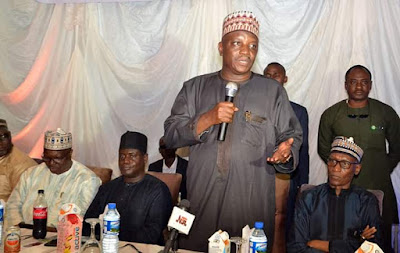 There is rising tension  in  the Rural Electrification Agency(REA) over the appointmemt of two directors from Taraba state on the agency by the Minister of Power, Engr.  Mamman Sale.
Top government sources said the REA had specific directive that the appointees should be in charge of procurement and funds.
The directors are, Mr. Bulus Maiyaki in charge of procurement and Dr. Lawal Ibrahim named the director in charge of fund.
Blueprint further gathered that Maiyak,was internally redeployed from within the system, while Ibrahim was engaged from outside.
This development has created concerns in the agency  that more of such appointments might still come from Taraba state.
The appointments, described by agency sources  as ‘hasty’, were  made ahead of the that of the  new  REA managing director, Engr. Ahmad Salihijo Ahmad, thus creating a huge challenge for the Ahmad who resumes office Thursday.  .
Some concerned staff members who spoke to Blueprint under anonymity, said the immediate past minister of power, Babatunde Raji Fashola, SAN, never dabbled into the agency’s affairs throughout his tenure.
Furthwr to this, the aggrieved workers said the minister of state for power, Mr. Goddy Agba Jeddy, who supervises the agency was allegedly left out of the duo’s appointments.
Sale was said to have done the  postings in a memo to the agency dated December 27, 2019.
“I wish to inform you of the deployment of the following officers from their present position as follows:  Dr. Lawal Ibrahim(Director, Funds); Bulus Maiyaki (Procurement); Demas Y. Dideno(Deputy Director of Procurement now Deputy Director, Planning, Research and Development); Adeyemi Moses Adelekan(Assistant Director, Procurement to Assistant Director, Planning, Research and Development); Engr. Magaji D. Bala (Assistant Director, North-West to Assistant Director, Procurement); and Engr. Turba Gabriel Dangula, Assistant Director, Projects to Assistant Director, North-West)”, the letter read in part..
“It is strange for a minister of power to interfere directly in the affairs of REA by dictating who should be in charge of certain units.
“This is the first time we are experiencing this kind of interference. It is more curious that the minister is more interested in the units on procurement and funds.
“Why we are disturbed is that minister of state for power, Mr. Goddy Agba Jeddy is in charge of the agency but he was not in the picture of the postings done by Sale.
“The staff of REA are certainly unhappy. We are aware that the minister is allegedly planning more reshuffling based on ethnic agenda,” one of our sources told Blueprint.
While calling for presidency’s intervention, another source said: “We want the minister to respect the tenets of a memo written by the Secretary to the Government of the Federation, Mr. Boss Mustapha which spelt out the duties of Sale and his minister of state, Jeddy.
A memo by  SGF  Mustapha October 18, 2019 states that REA is to be supervised by the ninister of state for power,
“I write to formally inform you that President Muhammadu Buhari has approved the schedule of duties for Ministers and Ministers of State to facilitate effective delivery of their ministerial mandates based on government priorities.
”The Minister of State shall assist in the formulation and implementation of policies within his scheduled areas in a manner that supports the realization of the mandate of the ministry.
“The Minister of State shall be responsible for the following programmes/ activities of the ministry: Rural Electrification Programmes and Training and capacity development.