What my 2023 Taraba state governorship ambition is all about – Bwacha 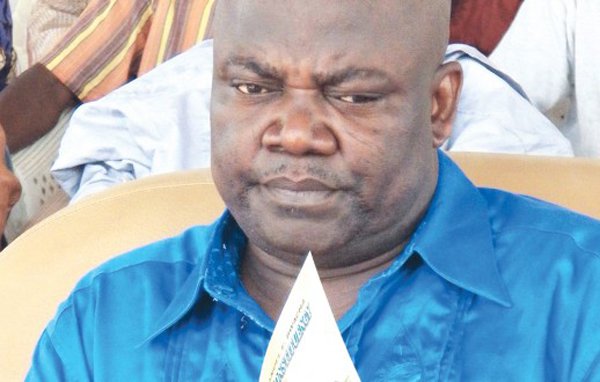 Senator Emmanuel Bwacha is the Senate Deputy Minority Leader. He is representing the people of Southern Taraba in the senate for the third time. Before this position, Bwacha had been elected Taraba State House of Assembly member, appointed commissioner and elected Federal House of Representatives member. In this interview with Senior Correspondent Fanen Ihyongo and other reporters, Bwacha speaks on the issues affecting Taraba State and gives insights on why he may contest the governorship election in 2023. Excerpt:
You have been doing a lot of donations and empowerments to your constituents of late. Should that be interpreted as a warm up towards the 2023 governorship contest?
If I buy vehicles for traditional rulers today, it is not the first time that I am doing so. And it is not the first time that I am touching on the lives of people in my constituency. This sudden interpretation about trying to do something is giving me concern. In the first place, if I may ask, am I qualified to be a governor? The answer is yes, I am eminently qualified. In developed democracies, I should be thinking of leading Nigeria as a nation and not to be the governor of a state. If God decides to make me the governor of Taraba State, I don’t think it is a spectacular promotion. When governors finish their tenures, they itch to come to the senate. And I am coming from the senate to become a governor. How will you describe this scenario? So, there is no big deal if I want to become governor. After all, I will be demoting myself. I am a principal officer of the Senate of the Federal Republic of Nigeria; if my people want me to be governor, I will first of all seek the face of God. I will ask God, ‘have you allowed me to go?’ And if God says go. I will go and contest.
But let me tell you, there are no strings attached to the goodwill I extend to my people. I work with the pulse of my people and I am someone who likes sharing what I have with my people. I don’t know why they concentrate on the vehicles. We have shared many other things, and we are sharing scholarships the day after tomorrow to over 260 students across the zone for students in tertiary institutions. We do this every year since 2011. I started the foundation in 2003. It subsisted until 2007 when I was running litigation on the election I contested. That was why the scheme was suspended. When I came back in 2011, we have been running the scheme every year. For this year, 268 students have benefited from the scheme. So, if it pleases God that I should be the governor, I have no problem with that.
In the 2015 general election, you were a leading proponent of power shift to Southern Taraba, on the grounds that the Northern and Central zones had had their shares. Now that Southern zone has also tasted the slot, will you support the idea that power should go back to Northern Taraba where the rotation started from?
I don’t want to claim God’s glory. The God that I serve is a consuming fire. It is the God that made it possible for us to have power shift to the Southern part of Taraba State.


Indeed, he used some of us, but it was all His will. And I can bet you that the zeal to begin the rotation from the South has increased geometrically.
The reason I don’t know. The people themselves seem to be thinking we need to print our feet on the sand of destiny. Virtually all zones in the state have served up a term or terms. So our people are saying let us begin this zoning from this zone (Taraba South) now and go up to the North. What is their reason, I am still asking? At the fullness of time, they will tell me. This will also tell whether I should contest or not.
You were with the Minister of Power and All Progressives Congress (APC) chieftain, Saleh Mamman, at the wedding ceremony of his daughter in Jalingo. Are you planning to defect to APC?
I wish to say that in my kind of politics, I try as much as possible to eschew bitterness. By the way, is there truly party difference in the Nigeria scenario? Take a look at the members of the APC and those in PDP. In the entire APC, apart from President Buhari, all the rest were PDP members.


I said this while I was sitting with the minister. He is not quite a visible politician, but I understand that he has some connections with President Buhari. He is actually not a migrant to the APC. But APC is populated largely by PDP members. It was a project to defeat President Jonathan. That was what brought them together – strange bed fellows. Most of them are all political tourists in both sides of the party. So it does not stop us from establishing friendship and building bridges across board, because the political parties are not premised on ideology.
In spite of the insecurity situation in Taraba State, you still come around to interact with people, when other politicians are running away. What is the motivation?
I cherish staying around my people, because they are the source of my position. Staying away from those who had put up their best to ensure you are where you are today is not the best calculation by a true politician. I derive pleasure interacting with my people. I hear from them in their numbers, when they come. It is through them that you will realise that poverty has reached a crescendo. It is through them that you will understand that there is failure in governance; from the grass roots to the top. This is how I get to know the pulse of the nation. So, the people are my power and source of awareness. I also want to appreciate the security operatives for the stability of the security situation in Taraba State. The insecurity had reached a frightening point that people were scared to even come home. From the herdsmen attacks, there has been an appreciable stability. But from the perspective of criminality, there is no reasonable improvement.
There are still criminal elements that are terrorising and kidnapping people.
As I speak, a younger brother of my colleague has been kidnapped along the Jalingo highway. About two persons were killed in the process. As I speak to you, he is still in the bush even as the ransom has been paid for him to be freed.
The person who took the ransom cash was also abducted! Criminal elements are still very much on the rampage.
What do you think can be done to tackle the security challenge permanently?
The relative peace we are enjoying is what has replaced the instability that was caused as a result of herdsmen attacks. The herdsmen hostilities and killings have reduced remarkably. What we are facing now is largely by criminal elements. We need to encourage the police to step up the instrument of community policing, which in itself requires an encouragement of government, because the police is itself a creation of government. If this is done, we may ourselves point out the criminal elements in our midst. Criminality is thriving because of government’s failure to protect lives and properties of the citizenry.


In this kind of situation, the presence of security is very important. But again, the question of the military in managing internal crisis appears not to be the best practice. In other climes, the presence of soldiers everywhere creates fears in the minds of the people. If you are in the US for example and you see soldiers like this, you will be wondering whether it is a war situation.
A lot needs to be done so as to tame the tidal wave of criminality in the state. We are trusting God that the state government will intensify efforts, in collaboration with security officials, to tackle this menace.
What is your take on the crisis in the Taraba State House of Assembly?
I am not seriously involved in local politics in Jalingo.

All these things are for us to learn the democratic system of governance that we borrowed. So when you see a parliament being pocketed by the federal or state government, it is actually not a good development. This has the tendency of thwarting development, not only in Taraba State, but all over the world.
As an opposition member in the National Assembly, I always insist that the parliament should be independent. I don’t know what transpired there in Taraba State House of Assembly. I haven’t listened to both sides of the divide.
As a lawyer, I know the significance of fair hearing. Of course, I spoke with two of the members, but I haven’t gotten the chance to discuss with the governor.
May be, when I speak with him, I will understand the truth about what transpired in the House
Share this: