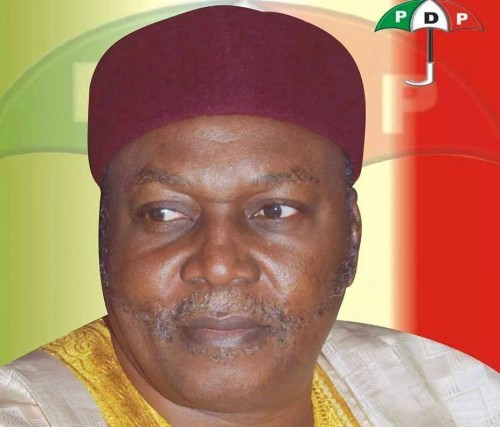 Nigerian Ambassador to the Republic of Trinidad and Tobago, Amb. Hassan Ardo, and Taraba Chairman of the All Progressives Congress (APC), Mr Ibrahim El-Sudi, have called on Gov. Darius Ishaku to make public the money the Federal Government has refunded to the state for rehabilitation of Federal Roads by the previous administration of Gov. Danbaba Suntai.
The two APC , who spoke separately to Journalists in Jalingo, alleged that more than N10 billion had been refunded to the state in 2019.
They declared that the amount was not made public even though Gov. Ishaku had severally told the media that the state had written to the Federal Ministry of Works and Housing demanding for such refunds to enable Taraba to continue with the rehabilitation of roads across the state.

Ardo said it was in the spirit of public accountability and transparency for the state government to make public what it has received as refunds to enable stakeholders monitor the use of such funds in the public interest.
El-Sudi observed that the state Assembly must by law, appropriate all funds accruing to the state to ensure transparency and accountability.
“I wish to, once again, remind the leadership of the state House of Assembly to be up and doing in carrying out its responsibilities in protecting the interests of the public and indeed the constitution they all swore to defend but not to remain adamant in the face of its violation.
“The governor should come out and explain to Taraba people what the reimbursed amount was used for and the process he followed to spend the refunded funds,” Ardo said.
Both chieftains observed that the silence of the governor and other state officials over the funds in question was raising concerns among the electorate and that it was not supposed to be so.
The APC Chairman, who said that he would not stop criticising the Darius administration until it did the right thing, explained that the citizens had the right to development.

He said; “the Governor has always asked the people of the state to give him peace and he will give them development, but despite the relative peace across the state, there is no development to show”.
He regretted that the present administration had not initiated a single project since assumption of office for a second term in May 2019.
Responding to the issues raised, Senior Special Assistant to the Governor on Media and Publicity, Mr Bala Dan-Abu said he was not in the position to confirm whether the amount alleged to have been received as refunds from the Federal Government for Federal Roads fixed by the state government was right or wrong.
He,however,dismissed all allegations by the opposition party chieftains as speculation and asked them to produce evidence.
Dan-Abu described them as a group of failed politicians who were still suffering from the defeat they suffered in in the 2019 general elections, and subsequently in several courts of law where they attempted to upturn an election that was freely given to governor Ishaku.
He urged them to sheath their swords and join hands with the Ishaku administration to turn around the fortunes of the state in the general interest of the public.
Tell your friends