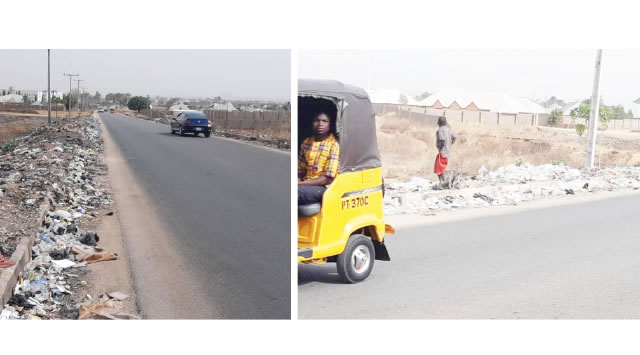 Cleanliness they say is next to godliness. But this saying doesn’t seem to appeal to some residents of Jalingo, the Taraba State capital, following their indiscriminate dumping of refuse in many areas of the city. The act continues to make the city dirty.

Some of the residents who spoke to Saturday PUNCH decried the non-conduct of monthly sanitation in the state for the past six years which they claimed affected the cleanliness of major towns.

According to Dr Hassan Dangiwa of Foundation Hospital, Jalingo, a dirty environment breeds diseases that ordinarily should have been avoided.

Dangiwa said almost one in four Nigerians defecates in open areas because of the lack of access to proper sanitation, like private toilets or communal toilets.

He said, “In fact, the statistics got worse in 2000 with 36.5 per cent of Nigerians having no access to sanitation facilities that hygienically separate human excreta from human contact.

“By 2015, the figure dropped to 32.6 per cent, likely driven by rapid population growth and a lack of sufficient private and public investment. Open defecation comes with many risks. It can lead to waterborne diseases, preventable deaths, and hinder education and economic growth. It also infringes on people’s privacy and dignity.”

Mallam Shonkani of Kona ward in Jalingo said the lack of sanctions for people dumping refuse indiscriminately in many areas in the city was a major problem especially in major towns.

He added that the lack of proper waste disposal facilities and latrines was hampering communal efforts aimed at ensuring clean environment in some areas where community volunteers decided to take up the challenge.

The USAID assisted Effective Water Sanitation and Hygiene Services is trying to intervene in the situation but the result hasn’t been impactful because the state government has not invested in sanitation.

Shonkani said, “There are efforts being made to address the issue of open defecation and improving toilet coverage. NGOs, faith-based organisations, community leaders and residents have been contacted to work in this regard and discourage people against open defecation and other sanitation related issues. But the lack of infrastructure such as public toilet, constant water supply and access roads is hampering the initiative.” Our correspondent who went round Jalingo observed that areas worst hit with dirt include PDP Junction, Market road, Kasuan Yelwa, Mayo-Gwoi, Mile Six and Mayo-Dassa.

A retired civil servant with the state government, Alhaji Inuwa Jauro, told Saturday PUNCH that since 2013, the state government had not released money for monthly sanitation exercise which ex-governor Danbaba Suntai sustained before his air mishap and subsequent death.

Jauro added, “When Governor Darius Ishaku assumed office in 2015, he dismantled the monthly sanitation task force and stopped the payment of ad hoc staff mostly women who were engaged to be sweeping the streets in the state capital.

“Despite the protest that greeted the nonpayment of their salaries for years, they were later sacked without pay and since then, Jalingo has become dirty. Look at the dump site along Jalingo-Yola road in the heart of the town. It’s an eyesore. There is no proper waste disposal mechanism in Jalingo and waste burning is causing environmental hazard to residents.’’

Efforts to speak with the state Commissioner for Environment and Sanitation, Alhaji Lawan Ibrahim and the ministry’s Permanent Secretary were futile. But an official in the ministry who spoke on condition of anonymity told Saturday PUNCH that the state government had provided waste bins in strategic locations in Jalingo and other towns in the state, adding that soon the exercise would be restored.

The official said the sanitation policy recently signed by the governor which would be used to start the sanitation process in the state made provision for basic levels of service.

He stated, “At least one sanitary latrine to serve an average of six persons per household, six sanitary latrines to 50 persons in school environment. The policy will also ensure that public sanitary facilities must be accessible within 200 meters of need.

“The policy makes provision for affordable water and sanitation services within the financial means of users. The policy deals with the management of human excreta and associated public health and environmental impacts and recognises the integral solutions to environment and sanitation.

“When we commence in full, solid waste management, generation of industrial and other specialised/hazardous wastes, drainage and management of potable water supply among others will be a thing of the past.

The source noted that the policy was so detailed that it took adequate consideration of issues relating to sanitation, including  social, cultural, technological, user satisfaction and environment friendly criteria.

Our correspondent observed that after the stoppage of the monthly exercise, major streets in Jalingo grew weeds with some water channels remaining blocked thereby causing flooding in some parts of the city when it rained.

The unnamed official didn’t want to talk on why the exercise was stopped. But from the protest of the street sweepers who were not paid for two years, it was deduced that the state suspended the exercise for lack of funds.

The new Head of Service, Ms Suzy Nathan, recently mobilised workers across ministries to a compulsory cleanup to restore the serenity of the secretariat.

Though the USAID is intervening in water, hygiene and sanitation areas through its Effect Water, Sanitation and Hygiene Services, the impact has yet to be felt by the residents especially those in Jalingo.

Hajiya Hauwa Hamza of USAID noted that the organisaton had engaged civil society organisations to advocate improved sanitation services and discourage open defecation in the state.

Hamza said, “The civil society groups by the terms of engagement are supposed to partner with the government and public on ways of improving sanitation in the state. They are to encourage functional sanitation infrastructure in public places such as motor parks, restaurants, malls and markets, among others.

“They are also supposed to build and renovate existing public toilets and collaborate with community leaders and make people take ownership of the infrastructure for improved services, revenue generation and good hygiene.’’

On his part, the Chief Executive officer of Youth Progressive Association in Taraba; one of the CSOs carrying out advocacy on sanitation and open defecation in the state, Mr Boniface Koson, told our correspondent that much work had been done in that regard.

Koson stated, “We took advocacy to the main motor park and Jalingo main market. So far, the response is positive. We are expecting the full result from the volunteers soon and I will make the result available for public consumption.”