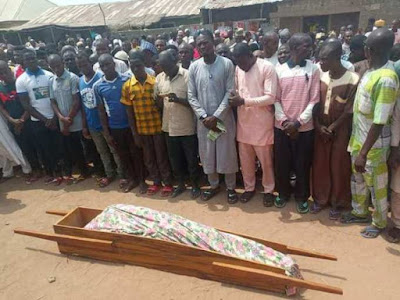 The Police Command in Taraba has confirmed the killing of five persons by gunmen in the early hours of Sunday after the general elections in the state.
DAILY NIGERIAN gathered that victims were members of the ruling All Progressives Party, APC, who were returning from Karim Lamido area on election monitoring exercise.
The Police Public Relations Officer in the state, David Misal, made the confirmation while speaking to journalists in Jalingo.

Mr Misal said the five persons were coming from Umari to Cambri villages in Karim Lamido Local Government Area when they were ambushed at about 3:00 a.m. by the hoodlums and shot dead.

The PPRO, however, explained that the killings had nothing to do with the elections.

“Yes, five people were ambushed by hoodlums and shot dead in the early hours of Sunday in Karim Lamido Local Government Council of Taraba.

“The killings do not have to do with elections, it is being investigated as a criminal matter,” he said.

Aaron Artimas, the spokesperson of the All progressives Congress, APC, in the Taraba, confirmed one of the victims, Muhammed Kambari, served as APC agent in his home town of Kambari and was coming from the village in the company of others when some gunmen suspected to be political thugs shot them dead.

“Kambari went to his home town of Kambari where he served as a party agent and was on his way back to Karim, the local government headquarters where they would proceed to Jalingo with the election results when he and four others were waylaid and killed.

“We have filed the report with the police and so far nothing has come out of it yet but it is our hope that they will bring the perpetrators to book,” he said.

Inuwa Bakare, the spokesperson of the Peoples Democratic Party, PDP, in the state, described the death of the five persons as “most unfortunate” but maintained that the party had nothing to do with the incident.
“The election in Karim Lamido Local Government Area and indeed the entire state was very peaceful and there was no incident of recorded violence.

“It is sad that people were killed after the election on their way to back to Jalingo,” he said.

The News Agency of Nigeria reports that the Presidential and National Assembly elections were held peacefully across the state on Saturday and collation of results ongoing in various local government councils.