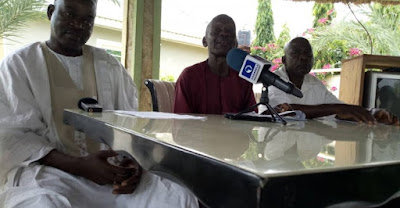 The Action Alliance Party in Taraba state has appealed to the Independent National Electoral Commission INEC for outright reversal of the Wukari, Ibbi Federal House of Representatives election to ensure Justice for all.
State Chairman of the party Mr. Charles Buki who made the plea at a Press briefing in Jalingo, the state capital alledged that the Saturday’s House of Representatives election in many polling units in Wukari local government area had their election without using card readers, while in other places the card readers were scantly used.
According to the Chairman, as a rule of the thumb by the INEC electoral guidelines, their party has rejected the result of Wukari, Ibbi Federal Constituency as was declared by the returning officer in favour of the APGA’S Candidate Hon. Danji Usman Shiddi.
“Condemned the act in a very strong term and this is anti-democratic”. Charles said.
Mr. Buki also explained that up to thirty one thousand registered voters which were not accredited had their votes fraudulently recorded in favour of the winner and their candidate that was leading in the election was relegated to a purported losing position.
Reacting on the result, the Action Alliance Candidate for Wukari, Ibbi Federal constituency Prof. Yakubu Ali Yara said they have already forwarded a letter of complaint to the INEC Headequarters and they are waiting for their response for further action.
Ali Yara however appealed to his party supporters to be calm and patient as they will leave no stone unturned in ensuring that Justice is done through the appropriate channels.