Mumuye Community Urges FG To “Be Merciful On Nyame” 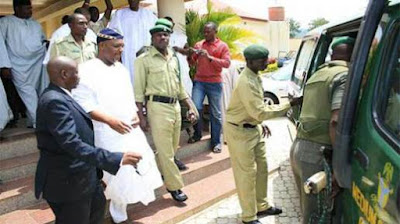 The Mumuye community in Taraba State has called on the Federal Government to “be merciful” on former governor Jolly Nyame, who is currently serving a 14 years jail term for misuse of public funds.

Nyame is serving his term at Kuje Prison in Abuja, after an Abuja High Court found him guilty of corruption charges preferred against him by the EFCC, But the community, in a press conference addressed by Mr Ntari Danladi, National President, Mumuye  Cultural Development Association, described Nyame as “an illustrious Mumuye son”, urging government to tamper justice with mercy.

“The Federal Government should have mercy on Jolly Nyame so that he will regain his freedom,” Danladi said at the press conference addressed on Wednesday in Jalingo. Danladi also distanced the association from the purported endorsement of a political party by a group purporting to be speaking on behalf of the Mumuye community, ahead of the forthcoming general elections.

He regretted that the name of the community was being used to seek political gains, and urged members of the public to disregard such claims. “The Mumuye socio-cultural group is apolitical and will never endorse any particular political party. It remains neutral while allowing members to express their political interests as they please,” he said. He cautioned politicians against desperate tendencies, and wondered why anyone could stoop so low as to use the good name of the people for “selfish political gains”.

Danladi declared that the Mumuye socio-cultural group would only support progressive programmes and fight for the collective good of the people.