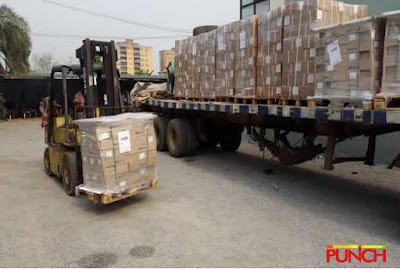 Ahead of Saturday’s rescheduled Presidential and National Assembly Elections, the Independent National Electoral Commission has said that materials for the elections in Taraba were intact and safe.
Taraba State Resident Electoral Commissioner, Baba Abba Yusuf, disclosed this on Wednesday while interacting with journalists in his office.
Yusuf explained that the Commission has finished the reconfiguration of the smart card readers preparatory for the elections on Saturday.
“I want to assure you that materials for the elections, which arrived the state late Friday last week, are still intact and are being sorted out.
“As you are all aware, electoral materials for Taraba arrived through Yola Airport and got here late on Friday because the airport in Jalingo doesn’t have night landing facilities.
“When the elections were shifted, the Central Bank of Nigeria was supposed to take back the materials, but CBN told us that they didn’t have space in their Jalingo temporary office to keep the materials.
“The CBN representative came and handed over the materials to us, which are now being sorted out for onward distribution to various local government areas in the state.
“We have since called the Police, Civil Defence and the DSS and made arrangements for the reinforcement of security at the INEC office to safeguard the materials.”
The Resident Electoral Commissioner called on the people of the state to remain peaceful and conduct themselves well before, during and after the elections.