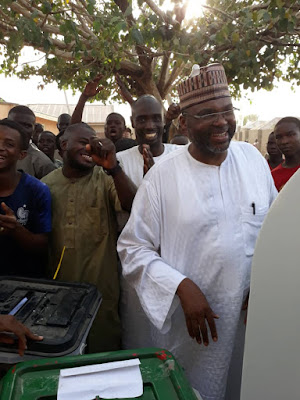 Voting is yet to start in the entire Sabon Gida ward in Gassol local government areas of Taraba state as a result of the card readers’ failure.

The card readers sent to the ward were programmed for 16 February election which was later postponed by the Independent Electoral Commission (INEC) due to logistics.

Our correspondent reports that when the election was postponed to February 23, the cards were not reprogrammed to reflect the new date.
Daily Trust findings revealed that eligible voters trooped out in their numbers as early as 7am but could not vote because the card readers malfunctioned across the 49 polling units in the ward.


However, voters in the area protested for what they called a deliberate attempt by the INEC and PDP to disenfranchise them.
A resident, Mallam Yakubu Sabon gida told Daily Trust that the ward was an APC stronghold and there are 23,000 voters in the ward.
The INEC voters’ education and publicity officer, Mr Fabian Vwamhi said he would find out and get back to our reporter.