APC, PDP trade words over destruction of billboards in Taraba 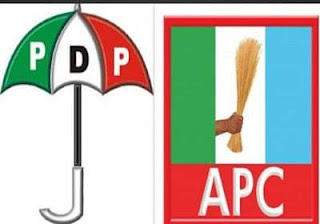 The Peoples Democratic Party (PDP) in Taraba State has accused loyalists of the All Progressives Congress (APC) of destroying billboards belonging to the party.
It alleged that the billboards were vandalised shortly after the campaign rally of Presidential Candidate of the PDP, Atiku Abubakar at the Jolly Nyame Stadium in Jalingo, the state capital.
An eyewitness, who spoke to our correspondent, said those who destroyed the billboard and banners were armed with various weapons.llp
The source disclosed that the thugs, who numbered over 50, blocked the major roads, as they destroyed all PDP’s postals and billboards in Jalingo metropolis.
Senior Special Assistant to the Governor on Media and Publicity, Mr. Bala Dan-Abu accused the APC of sponsoring the action of the thugs.
According to him: “the APC has again proved that it does not want the elections to hold and that is because they know they cannot win in a free and fair contest.
“Their plan which they are already executing is to cause crisis, make it impossible for the elections to hold, so that the APC-led Federal Government will take advantage of the situation to manipulate the results in their favour.”
Dan-Abu described the situation as unfortunate and an act of provocation by the APC in Jalingo.
He urged the police and other security agencies to “call APC leaders and their thugs to order.”
But, APC spokesperson in the state, Aaron Arthimas, disassociated his party from the destruction of the PDP billboards.
“From the information available to us, PDP hired thugs for the presidential rally, but they could not pay them what they were promised, hence they vented their anger by destroying the billboards.
“We will not descend so low to destroying billboards. Billboards and posters don’t vote and APC as a party has no business destroying billboards and posters,” he said.
Commissioner of Police, David Akinremi confirmed the report.
Akinremi said no arrests have made, but added that investigation into the accusations and counter accusation has commenced.
Meanwhile, the state police command has warned all quasi security outfits in the state, especially the Peace Corps, vigilance group, hunters and others to as a matter of urgency, cease from providing security at political campaigns, rallies or election duties.
The commissioner of police gave the directive in a statement yesterday.
He, however, said the command is “not unmindful of any group, or association who may peacefully mobilise in support of any political party during campaign rallies and processions, without recourse to violence or disturbance of public peace.”