9 communities razed, many displaced as causality figure in Tiv/Jukun clash rises to 10 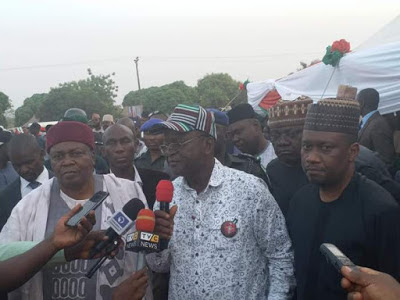 The chairman of Wukari Local Government Council of Taraba, Daniel Adi, has confirmed that 10 people were killed and several others injured in the ongoing clashes between Jukun and Tiv ethnic groups.

The Jukun and TIV ethnic groups share common boundary between Benue and Taraba states.
In an interview with newsmen in Wukari on Sunday, Mr Adi who called for calm, further disclosed that more than nine communities had so far been razed and displaced from the Kente ward of the affected area.
“As I am talking to you now, several households including Government Day Secondary School (GDSS) Kente, were burnt down by the attackers in the early hours of today.

“I made efforts to contact my counterpart in Ukum LGA in Benue to appeal to his people to lay down their arms and embrace peace,” Mr Adi said.
He disclosed that the Wukari local council was footing the bills of several injured persons currently receiving treatment at the Wukari general hospital.
Meanwhile, David Kente, a former APC governorship aspirant who hailed from the area, has condemned the wanton destruction of lives and property.
He described the crisis as unfortunate, adding that the Tivs and Jukuns in Kente had co-existed peacefully for many years after their first clashes in 1991.

He appealed to both the Tivs and Jukuns to embrace peace and sheath their swords,  promising that all those who lost their property to the current crisis on both sides of the borders would be assisted.
“You see this is achievable because after the 1991 clashes between the two ethnic groups in Kente area, I single handedly provided succour to all the affected communities by providing roofing sheets, cement and related building materials.
“I also provided boreholes to the affected communities both on the Benue side and Taraba,” he said.
The Police Public Relations Officer of the Taraba Police Command, David Misal, confirmed the development.

He however said after the death of two persons at the initial stage of the crisis on April 1, the police was yet to ascertain the actual casualty figure.
Mr Misal, an assistant superintendent of police, also confirmed that the command had deployed additional officers and men to restore peace and order in the area.
NAN