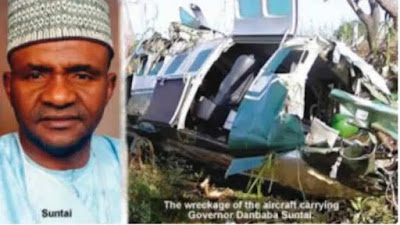 Accident Investigation Bureau (AIB) on Thursday released six final accident reports involving the crash that involved late Taraba State Governor, Danbaba Suntai; who the bureau said was not competent to fly the ill-fated Cessna 208B that crashed on October 25, 2012.
The other final reports involved Delta Airlines Airbus A330- 223 on February 13, 2018 and Bristow Helicopters Sirkorsky S76C6+, which crashed on February 3, 2016.
Others involved a Diamond DA40D aircraft operated by International Aviation College in Ilorin and a GulfStream G200 aircraft operated by Nestoil Plc.
Speaking at a briefing at its headquarters in Lagos, AIB Chief Executive Officer, Akin Olateru, said accident reports are not meant to be punitive.
He said though the bureau could not conclusively determine the cause of the crash involving the late Taraba governor, but hinted that Suntai as pilot of the ill-fated airplane was not certified, qualified and competent to fly the aircraft.
Olateru said the decision of Suntai to operate a Visual Flight a Rules (VFR) flight after sunset was inconsistent with aviation regulations.
The AIB boss fingered the Nigerian Civil Aviation Authority (NCAA) for its inadequate oversight duties as a regulator, because the ill- fated Cessna aircraft was not in NCAA registry.
Olateru said the ill- fated aircraft does not have any maintenance record in any Aircraft Maintenance Organization (AMO).
The report made two safety recommendations urging Nigerian Airspace Management Agency (NAMA) to take appropriate action to relocate the existing control tower at Yola Airport in order to enhance the aerial view of the approach path runway 35 from the tower.
The report said the NCAA should ensure all pertinent regulations with regards to the operations of the aircraft and certification of all relevant personnel and facilities of the Ministry of Works and Transport, Taraba State government are appropriately complied with.
The AIB said its findings concerning Suntai’s crash revealed that: “The pilot was not qualified to fly Cessna 172 and had total logged flying hours of fifty eight hours forty minutes.
The pilot had no relevant endorsement to fit Cessna Caravan 208B. The pilot does not have instrument ratings and night flight privileges.
The pilot reported an incorrect estimated time of arrival at Yola Airport. The pilot reported the number of persons on board as six to the control tower as against four actual persons found after the accident.
On the serious incident involving Delta Airlines Airbus A330-223, the AIB said its findings revealed that the aircraft engine caught fire due to fuel manifold cracking attributable to high vibratory stresses.
It reads: ”An over temperature condition and localized fire within the number one engine cowling triggered a fire warning. The over temperature and fire were caused by ignition of fuel from a hairline crack on the fuel manifold supplying fuel nozzle one.”
The AIB said it has issued safety recommendations to the National Transport Safety Bureau to consider informing the United States Federal Aviation Administration to issue an airworthiness directive and safety bulletin to the aircraft engineer manufacturer to address the fuel nozzle and fuel manifold modes.
On the Bristow Helicopters Sikorsky S76C+ crash, the AIB said the chopper crashed because the crew failed to adhere to company operations manual as it relates to after take-off checks.
The AIB said the crew did not disengage the autopilot to fly the aircraft manually.
It urged Bristow Helicopters to consider reviewing its procedure for terming crew back to flight duties after staying of duty for any period up to thirty days.
TODAY.ng