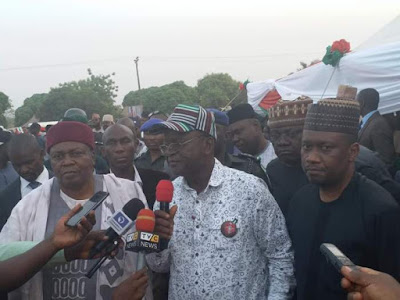 The states government of Benue and Taraba have set machinery to return peace among the Tiv and Jukuns leaving at the bolder of the two states along Wukari, Jandekwula, Kyaiyor, and Vaase.

The three local government chairmen of Katsina-Ala, Ukum and Logo in Benue state on Friday met with the council chairmen of Wukari and Ibi at the Palace of the paramount ruler of Wukari who is the chairman Taraba state Council of Chiefs, the Aku Uka of Wukari Dr. Shakarau Angu to discuss ways to end the unrest that engulf the Benue/Taraba bolder in the last one week.

The traditional rulers, youth leaders including religious leaders from the two states were part of the meeting.
While at the Aku Uka’s Palace for the peace initiatives and security meeting in Wukari, the chairman Ukum local government council from Benue state Hon. Ibellogo Tortyokaa quickly called for attention of the paramount ruler and his colleagues that youths from his local government (A Tiv locality) rescued a Jukun lady Miss Dorcas Alfred along Wukari/Jandikula road.

Dorcas, a Jukun girl from Kente village was reportedly missing since the beginning of the crisis, the chairman said the youths found Dorcas deserted in the bush, Dorcas also confirm that she lost her way in the forest while running for her life during the crisis that hit Kente village along Benue/Taraba bolder.
In the meeting, the chairman Wukari local government council Hon. Daniel Adi also revealed how he rescued 19 Tiv speaking persons who were trapped by the crisis in Wukari town,

Adi said himself and some youths were able to help the people out of danger inside Wukari, he also said he recovered looted properties from some criminals who took advantage of the crisis to loot People’s properties, Adi said the properties were handed over to the police in Wukari police area command for proper identification by owners.
After a long deliberations among the people, a resolution was issued as a strong statement by the stakeholders giving warning to the people at the Benue/Taraba bolder to desist from attacking themselves.

First item on the resolution was announcement of seize fire between the two worrying tribes the resolution stated that both the Tiv and Jukuns from the affected areas must eschew violence and reverse to their former relationship to maintain peaceful coexistence among themselves.

The statement call on the inhabitants of the two tribes to desist from suspecting themselves and have confidence on the peace resolution,  the stakeholders further call on the people to report any suspicious movement by any group or persons to the constituted authorities.

LEADERSHIP gathered that 15 people were killed, over 40 persons hospitalized with different injuries, properties worth millions were destroyed while thousands of people were displaced during the crisis.