Taraba violence: Tiv not at war with Jukun – Cultural leader 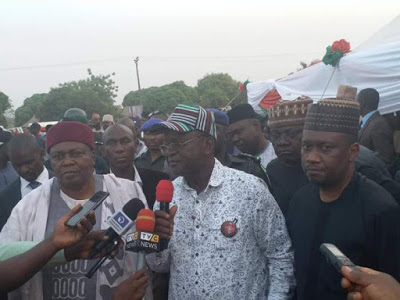 As peace gradually returns to areas recently hit by violence in Wukari, Taraba State, Chief Goodman Dahida, President-General, Tiv Cultural and Social Association in the state, has said that the Tiv people were not at war with their Jukunn brothers.

Dahida told newsmen on Tuesday in Jalingo that

he killings, burning of houses and looting of property going on in Wukari was the handiwork of miscreants from both Jukun and Tiv ethnic groups.
“Tiv, as a people, are not at war with the Jukun nation and I don’t think the Jukun as a people have sat down to plan any war against the Tiv.

“Our people are mostly farmers and their concern now is to prepare for their farms, especially as rain is about to return.
“What happened in Kente was a misunderstanding that was not supposed to escalate, but the miscreants have capitalised on that to loot and make it appear as if Tiv and Jukun are at war.

“I want to call on the Taraba and the Benue State governments to jointly put heads together and flush out these elements causing trouble in the area.
“Security agencies should take over the area and conduct intensive security operation to rid the area of criminals,” he said.

Dahida, who condemned the wanton killings and destruction of property recorded on both sides, called on Jukun and Tiv leaders not to allow criminals to infiltrate their ranks and cause problems among them.

He frowned at the rumour making the rounds that Tiv people were in alliance with Fulani groups to fight the Jukun, saying that the insinuation was coming from “evil people working against peace in Taraba”.

The News Agency of Nigeria (NAN), reports that no fewer than 10 persons have lost their lives and property worth millions of Naira destroyed since hostilities broke out between the two groups in Wukari last week. (NAN)