The rots in Taraba University 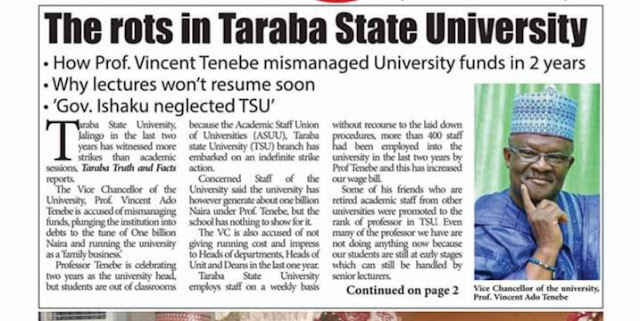 -How Prof. Vincent Tenebe mismanaged University funds in to years .

The Vice Chancellor of the University, Prof. Vincent Ado Tenebe is  accuse of mismanaging funds, plunging the institution into debts to the tune of one billion and running the university as a 'family business.'

Professor Tenebe is celebrating two years as the university head but students are out of classroom because t‎he Academic Staff Union of Universities (ASUU), Taraba state University (TSU) branch has embarked on an indefinite strike action.‎

Concern Staff of the University said the university has however generate about one billion under Prof Tenebe but the school has nothing to show for it.

The VC is also accused of not giving running cost and impress to Heads of departments, Heads of Unit and Deans in the last one year.

Taraba State University employs staff on weekly basis without recourse to the laid down procedures, ‎more than 400 staff had been employed into the university in the last two years by Prof Tenebe and this has increased our wage bill.

Some of his friends who are retired academic staff from other universities were promoted to the rank of professor in TSU. Even many of the professor we have are not doing anything now because our students are still at early stages which can still be handled by senior lecturers.
"The VC has no regards for procedures and does his things in his own way, ‎the results of the last graduating sets (2017/2018) was given executive approval without channeling them to the Senate Business Committee and the Senate for scrutiny.

"The VC is running a one man show, he does not have any regard for the members of the Senate nor other management staff, as far as he is concern Taraba State University is his personal business," an aggrieved staff told Taraba Truth and Fact.

The University problem began immediately after Governor Darius Ishaku was sworn in as State Governor in 2015, another insider source said.

"The issue at the state university are basically  funding, staff walfare and gross mismanagement on the part of the VC Prof. Tenebe.

‎"When the university was founded in 2008 by the Late Governor ‎Danbaba, during that time the staff strenght was low and Danbaba was giving 70m for payment of staff. Two percent of every capital projects the state government is given goes into the university for developmental projects and every local government contributes five precents for the growth of the university.
Now the university has grown bigger with more faculties and staff, yet the governor is still giving the University same 70M which Danbaba is giving in 2008. Until recently when the governor was forced to increase the money to 100M.
And then we have been following up that the Governor increase the money but the governor is not giving us his attention.

Infact Governor Ishaku sent a bill to the State House of Assembly to review the five percent monthly contribution of the Local Governments to the university to one percent and we protested it.