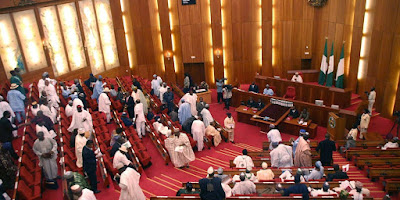 The Senate on Tuesday confirmed the appointment of Paul Tarfa as chairman of the North East Development Commission, NEDC.

The Upper Chamber also confirmed the appointment of Mohammed Alkali as the Managing Director and Chief Executive Officer of the NEDC alongside nine members.


This followed presentation of report by chairman, Senate Committee on Special Duties, AbdulAziz Nyako on confirmation of nominations into the board of the commission.


Contributing, Binta Masi (APC-Adamawa) observed that the Managing Director and Chief Executive Officer are from Borno State, just as the headquarters of the commission is sited in Borno.


She noted that in the spirit of fairness, other states facing insurgency should have been considered.

Ms Masi noted that late senator, Ali Wakili, suggested that the headquarters be domiciled in Bauchi State, but the request was turned down to allow for more negotiations, but wondered why the decision was made in favour of Borno.


Mr Nyako said the observation made by Ms Masi was paramount but indicated that the decision was reached during Senate and House of Representatives conference.

He said, “recall that in our bill, we left that issue open and during the hearing we agreed that if the headquarters should be in Borno someone from elsewhere should be Chief Executive Officer.


“It was the House bill that came with zoning within Borno. They had overwhelming votes in support of that during our conference and in the spirit of democracy we had to succumb.”


The Deputy Leader, Sen. Bala Na’Allah also noted that the observation made by Ms Masi was genuine but noted certain situations could warrant a change.

He said, “the citing of the headquarters is because the entire country associated the beginning of insurgency to Borno and other most affected states are Adamawa and Yobe states.

“So, chairman for the commission is from Adamawa and choice of Alkali is for certain convenience, which is required to galvanise support with the least inconvenience.

“Also, it should be noted that the action of the Executive led to choice of Alkali while citing of the NEDC in Borno is legislative action and in the spirit of cooperation among arms of govt we should let that go.
and confirm them.”

The Leader of the Senate, Ahmad Lawan, congratulated the National Assembly for passing the bill and Executive, for assenting to the bill and sending list of board nominees for confirmation.

“The people nominated here are qualified and experienced and prepared to hit the ground running.


“So, I urge the committee to monitor the commission’s take off to ensure the right things are done. We have learnt from issues of non smooth take off of Niger Delta Development Commission (NDDC) so that the NEDC will learn from that. The commission needs urgent take off.

He said the emergence of the commission was a sign that the national assembly had concern for happens in Nigeria irrespective of region and other indices.


“The NDDC bill was initiated in the National Assembly. It was vetoed by the Executive but we overturned the veto. It is the same spirit that led to the initiation of the NEDC. The smooth running of NDDC is due to so much protocol.

“So,from the day one of the take off of NEDC, the national assembly should start oversight to give life to North East and hope to other Nigerians doing business in those areas and I hope the pioneers would lay good example,” he said.


In his remarks, the President of the Senate, Bukola Saraki, congratulated the nominees and urged them hit the ground running.


He also emphasised the need for oversight of the commission to ensure proper implementation of projects.